After falling asleep on Tuesday evening, I was awakened (which is saying something considering the length of time it had been since my last sleep) by the wind and the rain outside the house.  Being from AZ, I find it hard to conceptualize rain that lasts more than 30 minutes, but it proceeded to storm all night and into the morning.  I’m sure the locals were less than thrilled, but this desert rat was delighted.

We decided to breakfast at the café at Woolworth’s which was delicious and I regret not taking a photo.  I had scones with jam and cream, which I’ve not had since our days of High Tea in the Queen’s Room on the Queen Elizabeth, so it was a nice treat.  Eric had something with a poached egg which became one of our main conversation topics.  I’m not sure how many of you out there have serious opinions on eggs (I seriously do not like them and that’s the extent of my opinion on the matter), but we were trying to decide how to properly poach an egg, and why in the world one would poach an egg hard in lieu of just boiling the thing?  If you have thoughts on this I would love to know because my life is just really interesting and I need to know things about eggs. Also, is it more advantageous to use the egg-poaching-tool-thingy as opposed to just a spoon, or is it just a ploy by William Sonoma to get us to buy something?  I apologize for the intensity of this topic, my thoughts are deep, what can I say? ;)

Following breakfast we headed out on the wine route (like Route 66, but better, for obvious reasons), and my compadres enjoyed a tasting by the fire at Warwick Vineyards. 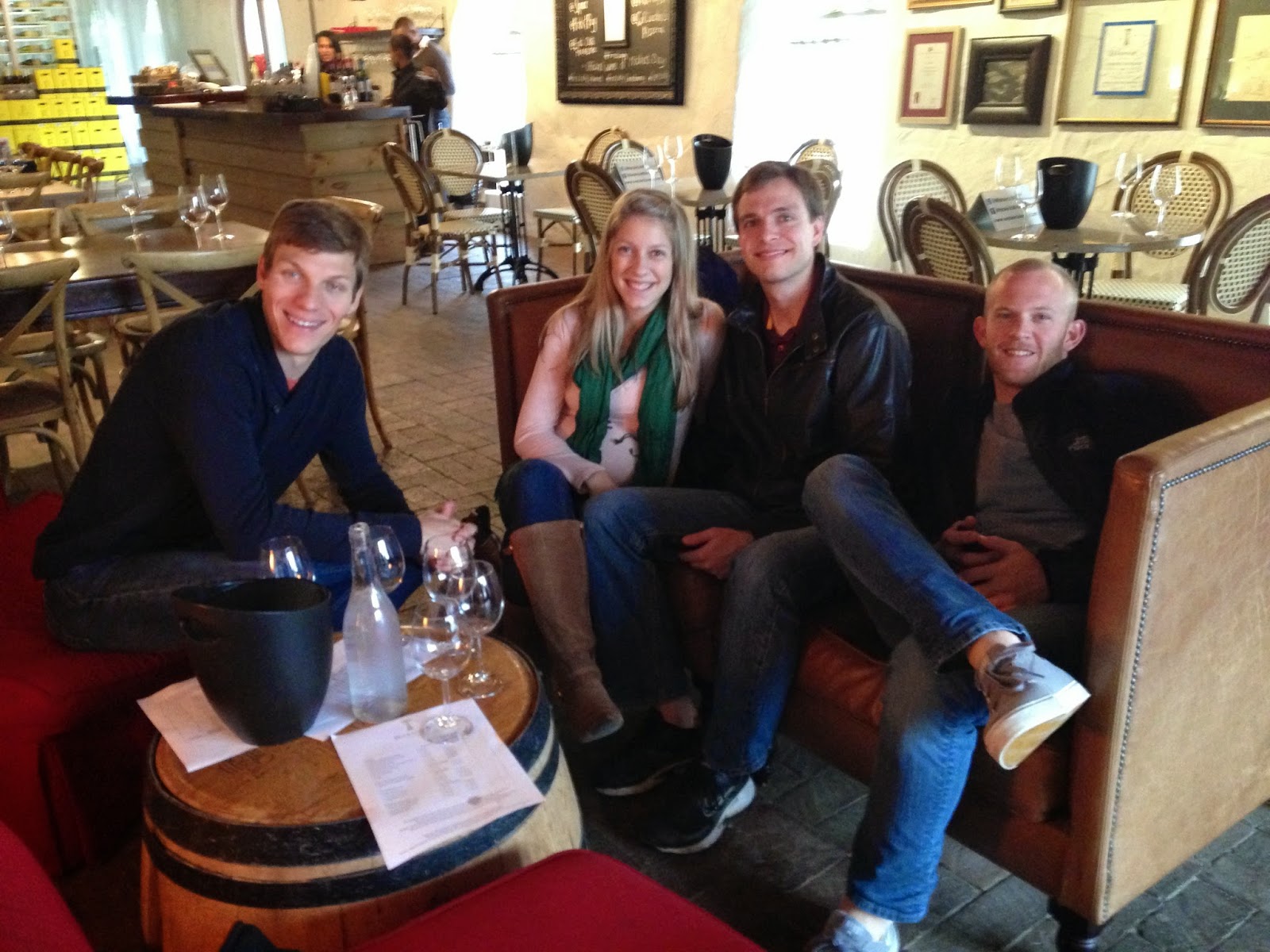 The day continued to be on and off blustery and rainy which I found to be increasingly delightful.  Who knew clouds could cover one place so long? Capetown and its surrounding so far is like a mix of places… sort of like Ireland meets San Fransisco meets Southern California.  There are hilly green pastures that are covered in fog, and everything grows like weeds.  In Capetown you have a garden automatically, you either cultivate it on purpose or just let it happen.

We drove through the fog and fields for a bit before stopping at the Spice Route, a small conglomeration of uniquely local artisanal shops and a vineyard.  This place is pretty awesome in that everything is grown and cultivated on site (the grapes for the wine are hand picked!), and you can taste everything from cured meats to wine to chocolate (also known as heaven on earth).  The chartucerie supplied some spicy sausage for our dinner… 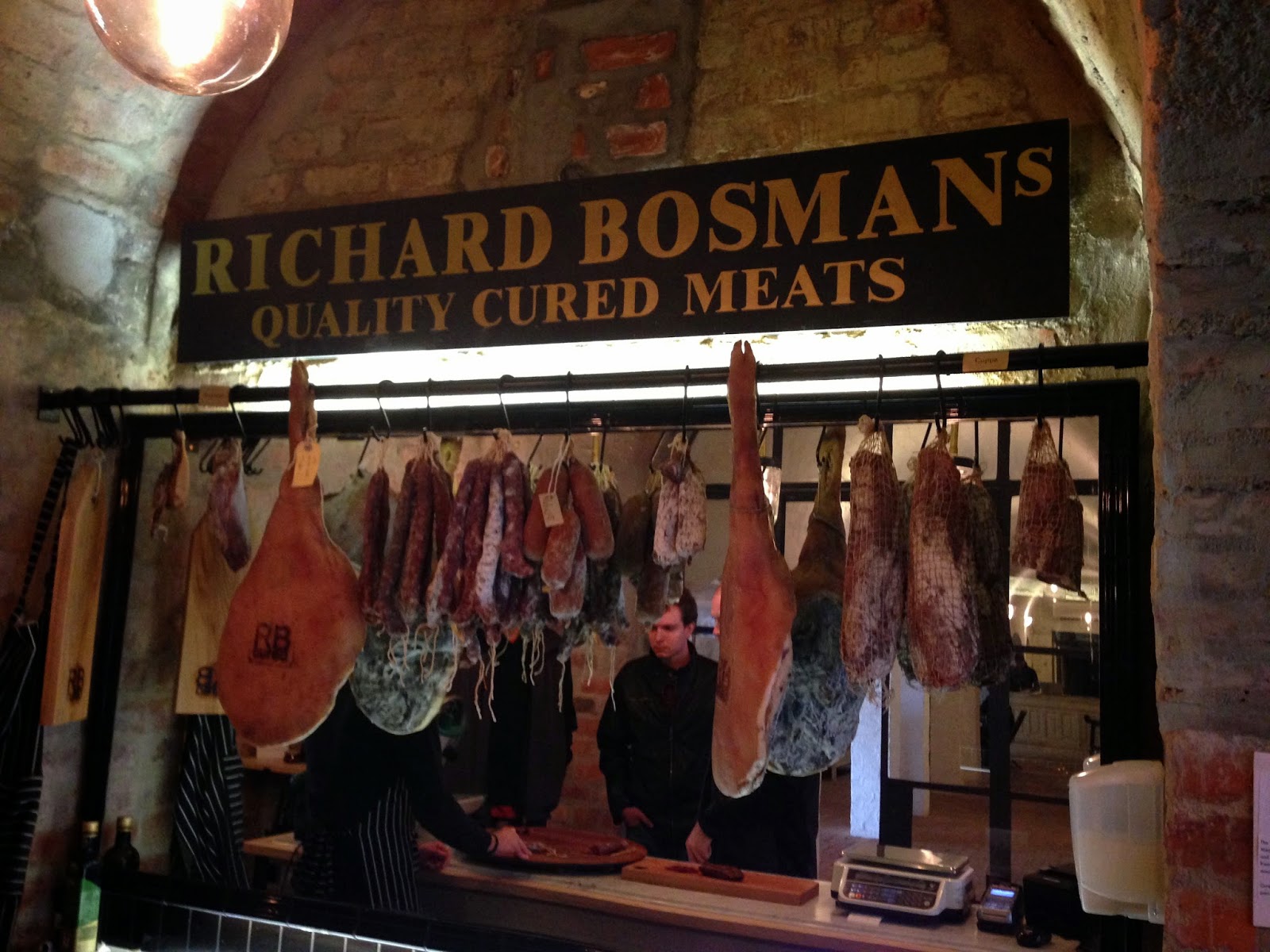 And we lunched with this beautiful view overlooking the hillside. 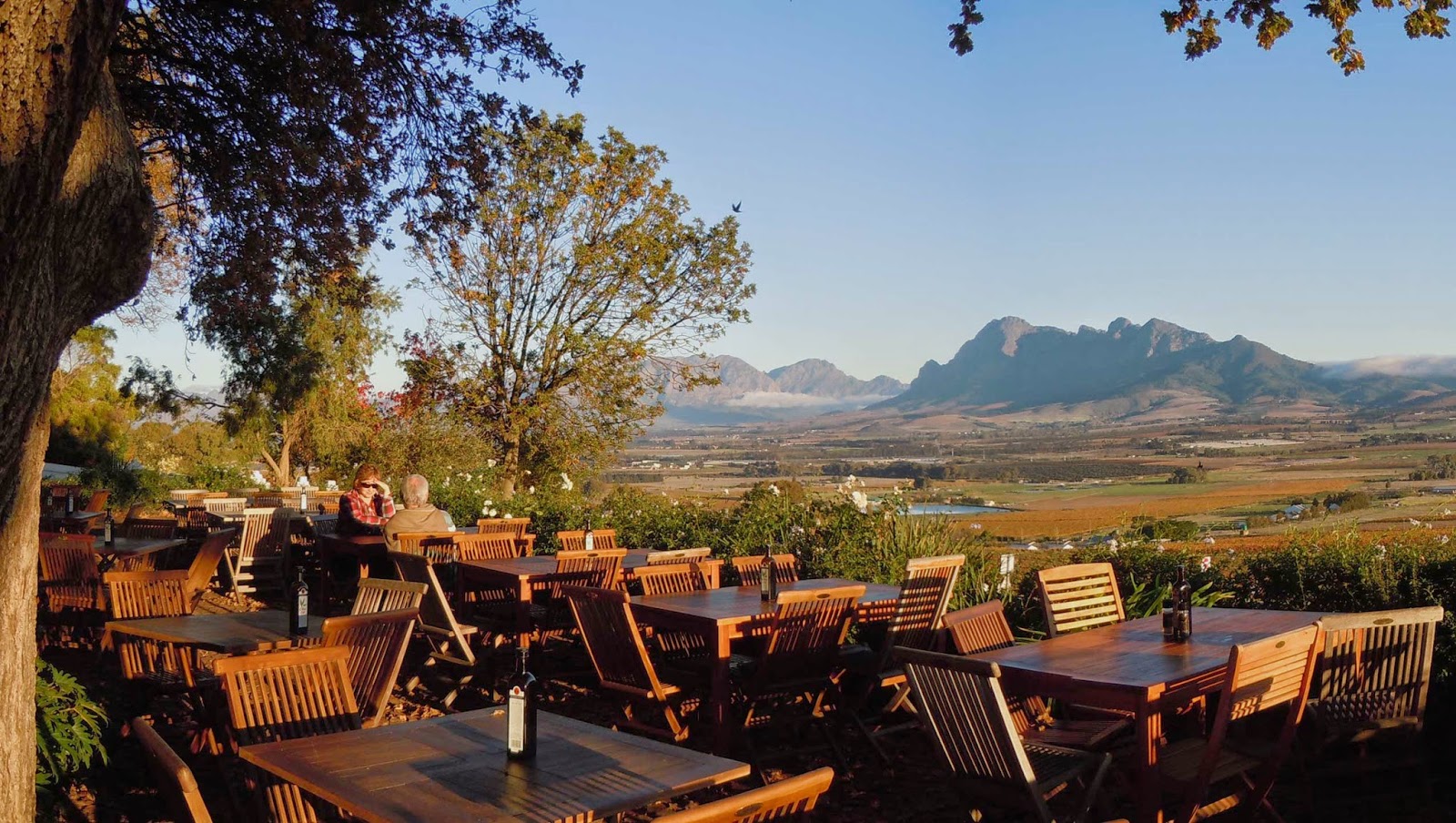 The flowers that grow here are unreal! 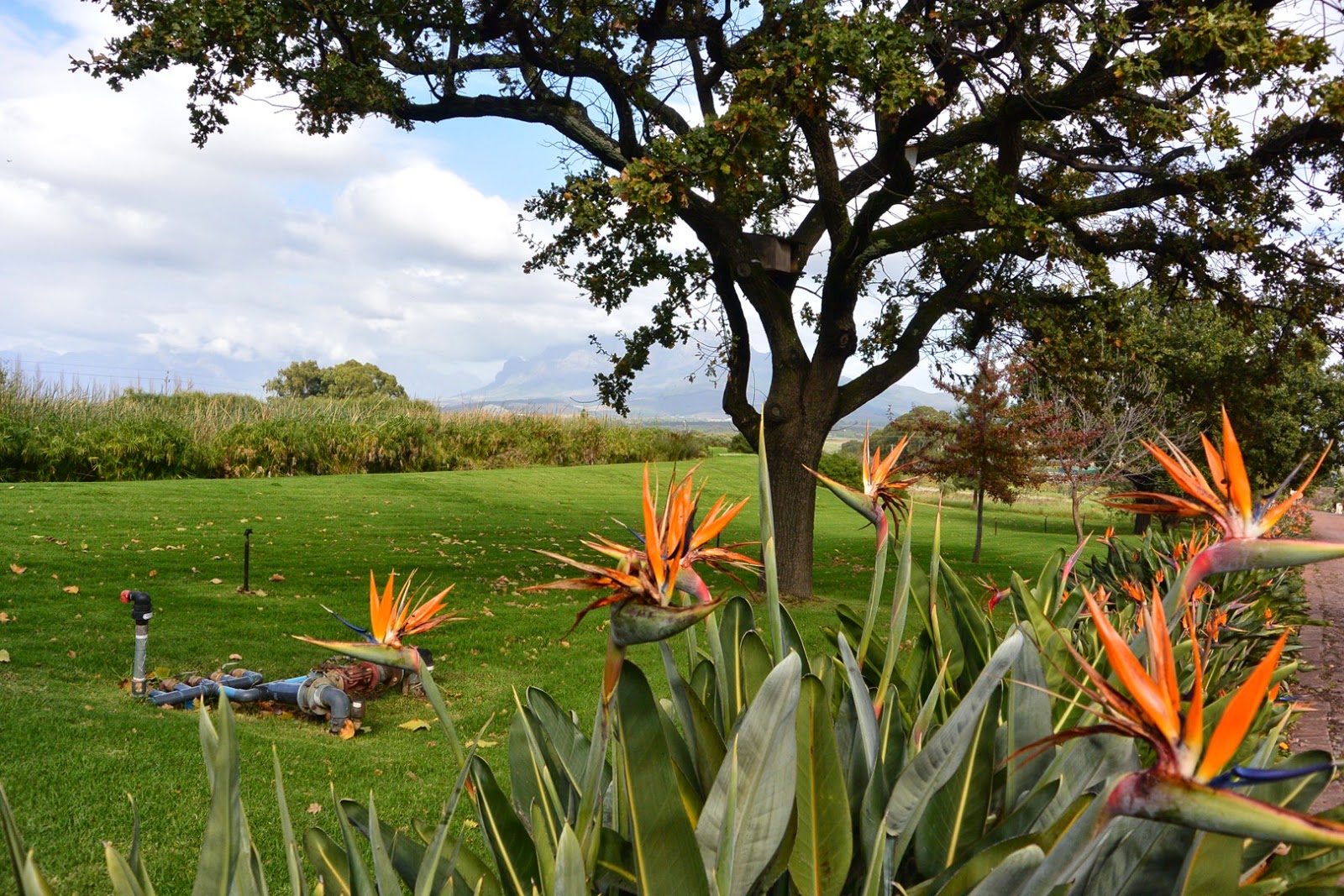 Afterward, we indulged in a chocolate tasting.  There should be chocolate tasting in every city in America – we should pass a law (call your local representative). We learned all about how the beans are grown, harvested, dried, roasted and then made into chocolate, and we got to sample varieties made from beans grown in Madagascar and Uganda to Bolivia and Chile.  YUM. 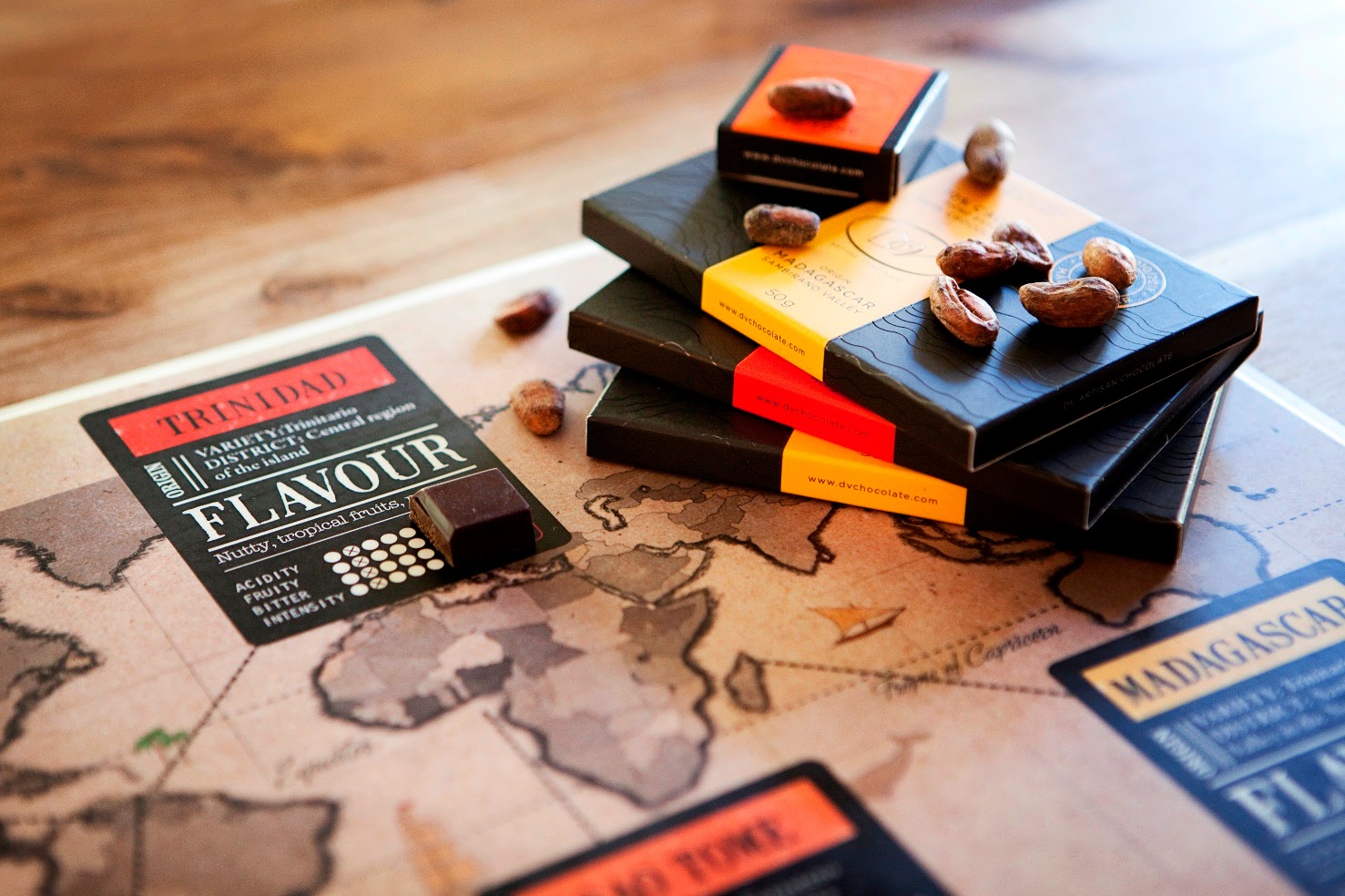 They also serve this little cup of drinking chocolate which has the magical power to turn any crap day into a delightful one, or at least it tastes like it could. In other news, whoever does their branding is brilliant because their packaging just makes you want to buy the stuff.  They had these posters hanging in their tasting room and I adore them! 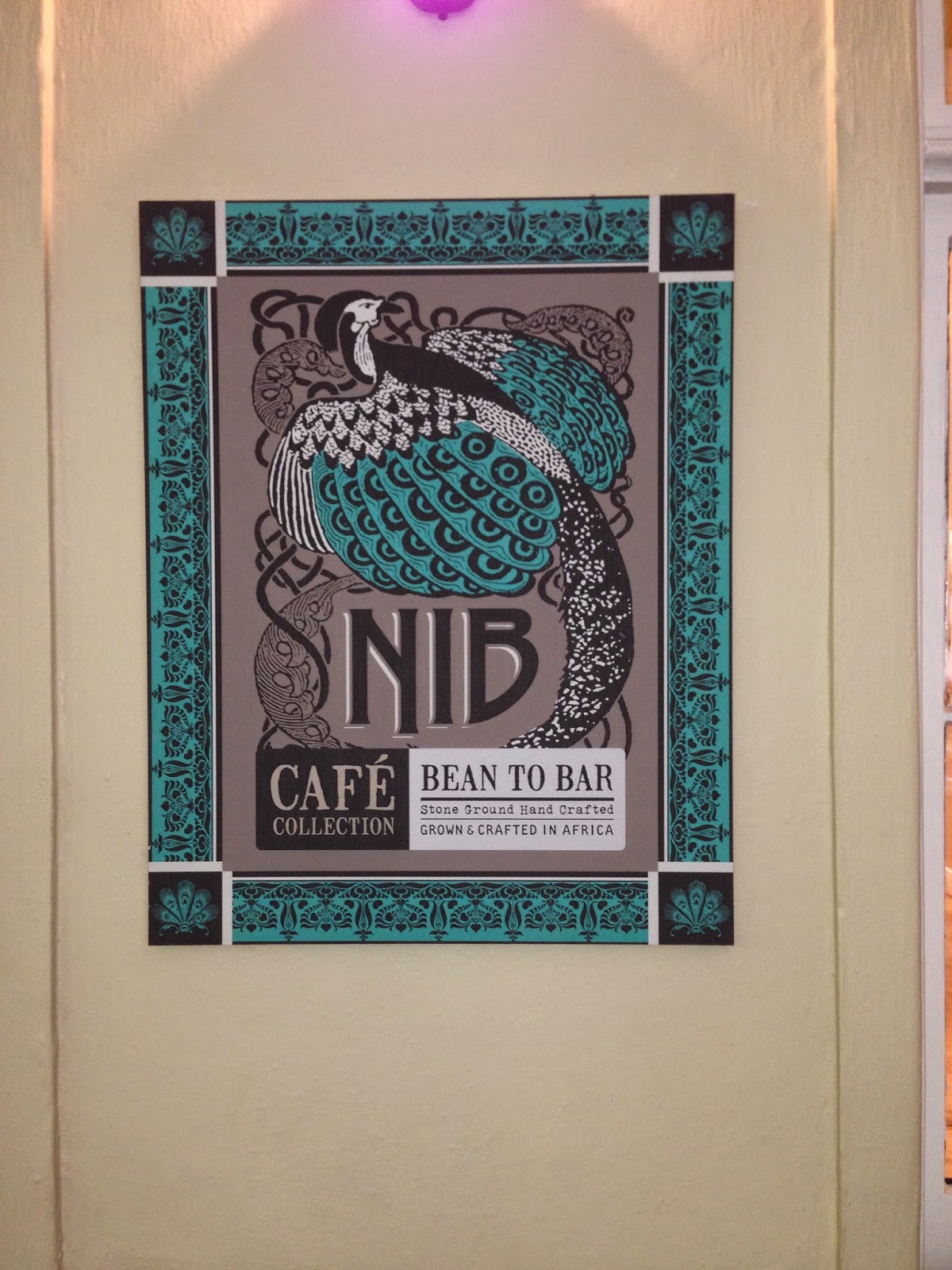 We asked if they were sold as prints, and told that they were not.  But the shop owner suggested we take a high-res photo of them and have them blown up, because that would be cheaper – I love this country. I’m out of wall space in my house, but I’m going to have to make some because I need to see those prints every day.

Our chocolate tasting cost a grand total of $2.50, which brings me to another point.  Food and experiences are FANTASTICALLY CHEAP in South Africa.  We have had two gourmet meals thus far and each has run us only about $12/person.  Wine tastings are unbelievable as well. Eric bought a basic tasting of 7 wines today for a grand total of $4.  Inexpensive wine and cheap chocolate – I’m ready to move!  We hear from our hosts that clothing and home supplies are substantially more expensive than the USA, so I guess that’s one reason to stay state-side.  Fuel is also more expensive.  In fact, we have yet to visit a place whose gas/petrol is less expensive than America, yet we always seem to be complaining about gas prices, why is that?

I must say that everywhere we have traveled, I find myself frustrated with the food scene in America.  In both South Africa and Europe we have been able to eat out at nice restaurants with quality, real ingredients, and pay relatively low prices for it.  Why can America not do the same?  It can’t be because sourcing the product is easier because France is not really agricultural, and shipping anything to Capetown costs roughly your entire bank account and first-born child.  It can’t be because the value of the currency is lower because EVERYTHING ELSE in France was extraordinarily more expensive when compared with the dollar.  I don’t think I’m saying anything new here when I say that the food system in America is jacked up, but I guess I don’t understand why we too can’t make a decent crayfish risotto with truffle oil and only charge $10. First world problems… 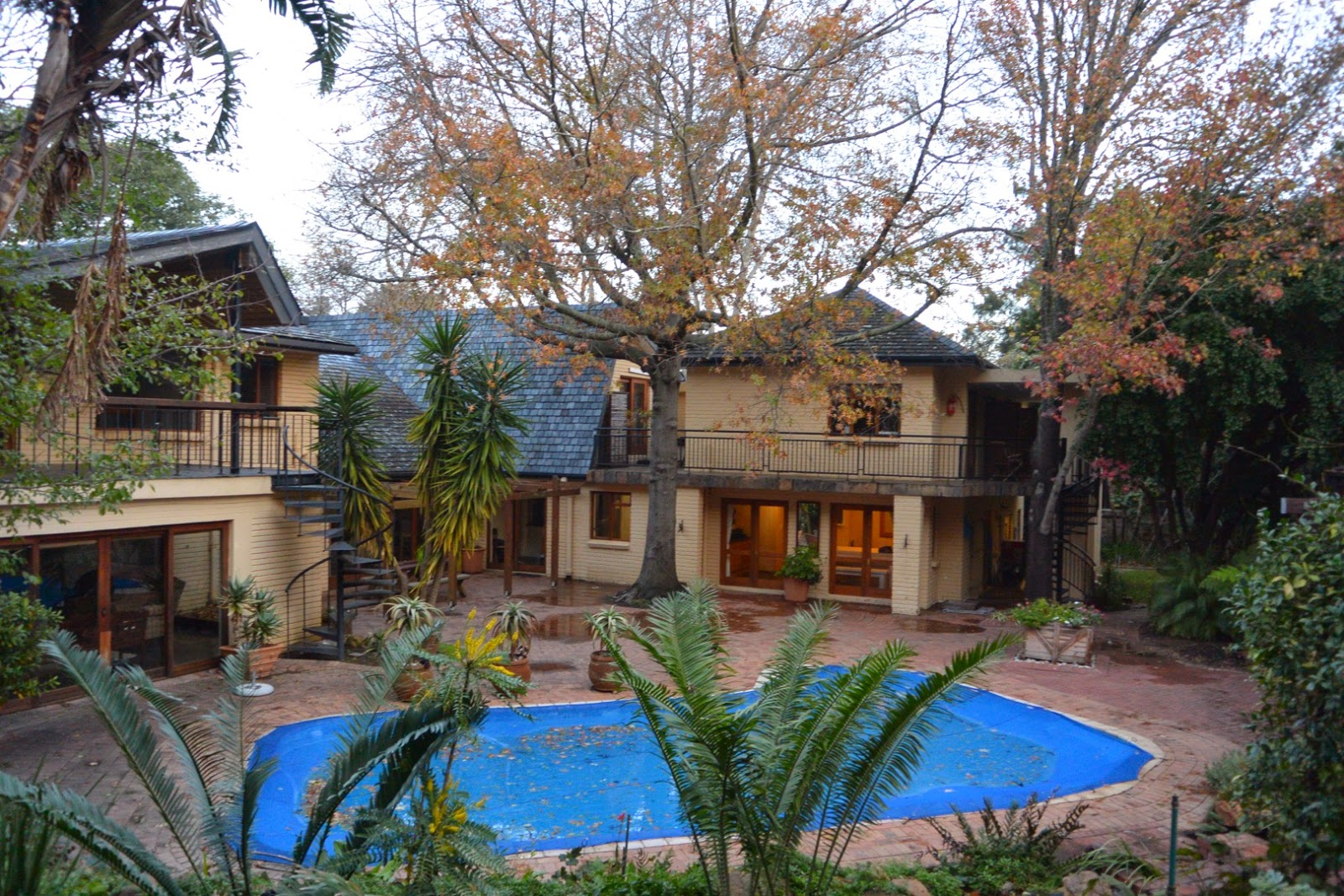 ...we took a little time to rest (and blog!), before whipping up soup with sausage for dinner!  We felt substantially more rested tonight, but still were ready to hop into bed pretty soon after dinner.
Tune in tomorrow to hear about how the rain ruined everything and nothing all at once, how we learned to drive a manual transmission on the wrong side of the road, and why Malfa pudding should come to the USA.