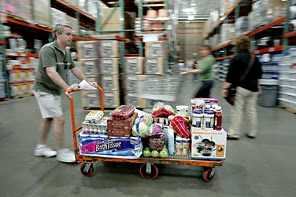 Costco... home of bulk packs of bread, 57 paper-towel rolls smooshed together into one (still ginormous) package, rice in 10 lb. bags, and lets not forget, aisles and AISLES of samples, served by some sweet old man or woman named Eunice or Bernie...

Costco holds a special place in my heart. The Costco that Eric and I normally frequent has been a place of joy for me since childhood, or rather since the days that it used to be a "Price Club." I have always enjoyed roaming the aisles of the members-only, buy-in-bulk stores. That is, except when I was very small. The forklifts used so scare me with their highly intimidating back-up "beep beep" noises. Now that I've gotten over my machinery-phobia... I have been trying to think about why it is that I love Costco so very much.

I think it is because I have been so used to the store my whole life. We belonged to Price Club, then to Costco (when it switched over), and the to Sam's Club (Boo on all Walton companies!!!), which, thankfully was short-lived.

** Brief sidenote... did you know that most major government institutions who offer reimbursement plans (i.e. Universities, Schools, etc.) for clubs/organizations/teachers will not reimburse you on WalMart purchases because of their poor business practices?? I swear, Google it.

Mooooving on...
In the end, I'm back at Costco and happy as a clam (BTW, who came up with this? Was there a study done on clams and their positive emotions??). Eric's parents have a membership and share it with us (suh-weet!), so we get all the perks of the relationship; gotta love the 'rents. In fact, the first time I ever met my in-laws (ridiculous story about to begin...), we met at a Costco. Eric's big plan was to see how many samples we could trick the old ladies out of (i.e. make multiple rounds), with one catch: Each time you made the rounds you had to wear a ludicrous hat of some sort. We brought a sombrero and a trucker hat, Eric's parents brought an Asian Rice-Picker hat. We. Looked. Insane. But we had a blast and Betty, the Pot Sticker lady, gave us extra food for our (and I quote) "gumption." And now I'm related to these people =)

I also love the food court!! Hebrew National Hot Dog with soda for $1.50?! Welcome back to 1978 prices, people! The turkey wrap is a pretty healthy option at only 500ish calories (if you remove the cheese), and I usually can't even finish it all. It makes for a super-sweet date night! and super easy on the wallet region! We make the rounds for samples and catch a quick bite if we are still hungry.

Now we get to the meat (no pun intended... kinda) of the Costco deal - everything in the aisles! We have purchased the following from Costco since our marriage (that i immediately recall):

Living Room light fixture
Kitchen Sugar/Flour Jars
A Lifetime supply of Printer Paper and Paper Towels, and Toilet Paper, and CFL lightbulbs
2 Gym memberships (which we love Love LOVE!!)
A Wii and all associated games and system equipment
A few books
A table
A swimsuit for Eric
And of course.... tons and tons of FOOD!

We have triple checked the deals we are getting and no other retailer can compare. The food deals are rockin' - the meat I can afford to buy at Costco is such better quality than Fry's or even Safeway, plus I get more for my money - love it! Eric loves the 2 gallons of milk deal, as the jury is still out on whether he is part baby cow... (jk). I love the spices and healthy cereals, and the blu ray prices can't be beat.

Also, can we talk about the LIFETIME warranty on everything?!?! Holy wow, what a smokin' deal! We spoke with an associate and asked him the most ridiculous thing he had seen returned during its' lifetime warranty. His answer: a TEN YEAR OLD couch! Yes, friends, ten years ago, a Chandler family bought a couch, kept it until they moved and wanted a new one and returned it, for the same amount they paid ten years ago! What?! Is this illegal?? No, This. Is. Costco. A savvy-shopper's heaven, Costco offers amazing deals to those who are ballsy enough to return a ten year old couch.

And, it's hard not to love a place where people buy food on FLATS. Yes, just like the ones you use at home depot to buy wood, washing machines, showers, and entire backyards. American consumerism, (in Obama's words) yes we can!

I have a hard time imagining the day when my relationship with Costco will come to an end - I feel like that day would also include things like the mountains crashing int the sea or hell freezing over... I like to think God will have a Costco in heaven, just because it brings me so much joy. And on any given day, chances are something from Costco (i.e. food paradise) will be on our Kitchen Table for Two!
Posted by April @ An Urban Acre at 4:38 PM