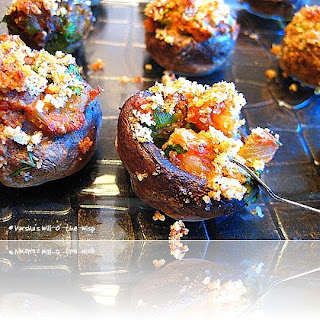 Now to my first recipe! This lovely dish graced our table on Tuesday, and I had the pleasure of getting not only one review of my cooking (Eric's, or course), but two! My lovely friend Rachael eats with us every Tuesday, prior to watching God's gift to television... The Biggest Loser (let the mocking begin!).

My relationship with cooking is largely love/hate. I find a recipe I like (usually online), look at all the ingredients, and then rip it apart (hence, the "hate") and put it back together in a way that better suits my tastes (usually resulting in the "love"). Sometimes I just need a title and I'm good to go! But usually, my lack of creativity forces me to steal a bit from others to make my creations... But really, whose recipes are truly original anymore? It's not like new ingredients are being invented daily! (This is what I tell myself so that I don't feel bad about my theft/destruction-of-others-recipes/lack of creativity problems)

Tuesday I was faced with a particular dilemma: lots of perishable foods in the fridge, and only 2.5 days in which to consume them (due to the impending Disneyland trip!). As a math teacher, I am reducing this to a logic problem: Food to serve about 10 people in my fridge, only 2 remaining dinners before departure... only one conclusion... better find a recipe that uses up a whole lot of the ingredients I have!

This post will feature what I consider to be the more original of the two - Shrimp Stuffed Mushrooms.

Clearly, this will be my husbands new favorite dish. The marriage of two foods, his love of both rivals his love for me, I am sure. And sadly, God has cursed me with a shellfish allergy (which I occasionally ignore with the usual disastrous consequences...), thus I will be unable to consume the dish, which makes for really difficult critiquing... but I shall press on! Below is how I made it (feel free to rip it apart and customize...).

Mushroom Caps (the number will vary depending on the type of shrooms - I used 16 of the small
white ones, but Portabellos could be delish as well! ) <--- really should learn the real names...

2 tbsp Italian Bread Crumbs 3 cloves Garlic (I literally use this in EVERY recipe, ok...maybe not pancakes... yet)


What'cha do:
1. Throw a little EVOO into a pan and lightly brown the shroom caps on both sides (bowl side and hat side, respectively). Get the oil a little hot first. You'll know when it's ready when it starts to ripple a bit. If it's popping and smoking, ya over-did it. Start over =)

2. Put toasted shroom caps aside. Add a bit more EVOO to the same skillet (want to retain all the yummy juices of the shrooms for our filling!), and mince the garlic into the skillet. let it sizzle for jut a bit - til you really start to smell the goodness (again, smoke = BAD, watch the heat!).

3. With the heat on medium, add some dashes of Cloves, Nutmeg, Salt, Pepper to the "garlicy" oil. Then add the chives and the shrimp. Toss to coat, and let the shrimp cook. You know when shrimp is done when it turns a nice pretty pinkish color. If it still looks a bit transparent, let 'em go a while longer.

**Sidenote: I feel that shellfish are a bit more difficult to cook than your standard meats. If you undercook them, prepare to spend the night "praying to the porcelain god." If you over cook them, plan on setting aside 3 hours just to chew them. Cooking shrimp well takes practice, so be patient! =)

4. While the shrimp is cooking, preheat the oven to 450. Grease a cookie sheet and prepare to stuff your shrooms with the filling.

5. When the shrimp are done, remove the skillet from the heat. Add your Bread Crumbs, and Ricotta Cheese to the skillet and mix thoroughly (the heat will help the ricotta to spread better). You now have your delicious filling - let the stuffing begin.

6. When your shrooms are stuffed nice and full (pack it in there, friends!), place them on the greased cookie sheet and toss 'em (gently!) into the oven. If you have extra topping or extra shrooms, don't worry! Just spread them on the cookie sheet and bake, somone'll eat 'em! Bake for 9-10 minutes or until tops are golden brown!

Make sure you serve while hot; no one likes a re-warmed mushroom!

If you're looking for a little more mushroom in your stuffed shrooms (you addict!), try chopping up the stems and cooking them with the shrimp in the skillet.

Eric loved them so much he couldn't even tell me because his mouth was continuously full. Rachael loved them too, but suggested I go lighter on the cloves next time. The amounts/types of spices are up to you; thankfully the recipe is super versatile and allows for tons of customization. What do you think? Any thoughts/tips/changes you would make?

Shrimp Stuffed Mushrooms; that's what was on our Table for Two (three!) on Tuesday!
Posted by April @ An Urban Acre at 3:11 AM