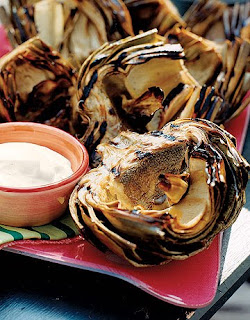 On the same adventurous Tuesday as Shrimp Stuffed Mushrooms (see previous post), I saw that my artichokes were on the verge of spoiling (this, by the way is a MORTAL SIN). Since we have been married, I have not once cooked artichokes, largely because they were not in season, but it left me thinking... how to prepare them?

For those of you who do not know, an artichoke is actually a large thistle. The plants look like giant weeds (mostly due to the fact that they ARE giant weeds), and the artichokes are the flowers of the plant. When you buy them in the store, what you a seeing is the bud of the flower. If you let an artichoke go too long without harvesting, it blooms into a lovely flower!

However, if you harvest them on time, they can be some of the most delicious veggies you'll ever have the pleasure eating. Life most veggies, artichokes are quite tough a fiberous, and thus require boiling, roasting, grilling etc. to bring out their softer side. After the artichoke is prepared, you peel off the leaves (you may or may not dip them in some sort of side sauce at this point), and then use your front teeth to scrape off the lower "meaty" part of the leaf. As disgusting/primitive as this sounds.... Artichokes. Are. Delicious. Here's how I prepared them...

2 tbsp butter (the real stuff, trust me on this one)


What I did:
1. Fill a large bowl with ice water and 1/4 of your lemon juice. Slice the artichokes in half (longways) and submerge in ice bath. This will not only help infuse them with lemon flavor, it also keeps them from turning an ugly baby-poo brown while you are cooking them (Food Rule 237: food that resembles baby poo is generally unattractive).

2. While the artichokes soak in their ice bath (always best to pamper the food before cooking), bring a large pot of water to boil on the stove, and begin heating your grill to med-hi. when the water is boiling, plop those suckers into the water and let 'em boil. Give it about 15 minutes.

3. During this time, you'll prepare your grill basting sauce (the extra of which will be your dipping sauce, yay!). In a bowl, mix a few tablespoons of EVOO with the remaining lemon juice and the minced garlic.

4. After 15 minutes, pull the artichokes out of the pot onto a plate and (I feel as though I'm stating the obvious here, but...) BE CAREFUL, they will be extremely hot. At this time you will need to use a spoon to scoop out the "choke." The choke is what would've been the pretty purple leaves and inner middle of the thistle flower, had you let it blossom. Scrape out all the little hairs and purple leaves that surround them.

5. Bast the chokes all over with your lemon garlic sauce, then - Throw them on the BBQ! You want to bbq them for as long as it takes to get the leaves a little singed (probably right around 10 mins). Make sure you rotate them frequently and baste them often, the more you do, the better the flavor.

6. Pull them off the grill and serve with the leftovers of your lemon garlic sauce for dipping. It can also be helpful to provide guests with individual dipping sauces and a bowl for their discarded leaves (otherwise you will end up with drippings on your nice new tablecloth....)

**Remember, when all the leaves are gone, you can still eat what's left! This is called the "heart" of the artichoke. It's just like the meat on the leaves, but without the hassle of all that scraping. Cut it up, dip it, and enjoy!

Eric LOVED them, and Rachael, who had never had one before (SHOCKING, I know!) said they were delish! My mom always boiled artichokes for us when we were younger, and I loved them (thanks, Mom!), but I think I'll be sticking with this recipe from now on; it's got more pizazz, and who doesn't love that??

Lemon Garlic Grilled Artichokes, that's what was on our Kitchen Table For Two on Tuesday!
Posted by April @ An Urban Acre at 10:15 AM