It's actually the tail end of day two for us here, but day one was 32 hours long, so thanks in advance for understanding why I didn't blog. ;)  It took us 15 hours or so to get from Phoenix to France, and we flew United (boo!) from PHX to Washington DC, and then DC to Monreal.  Air Canada was responsible to for flight to Paris, and WOW, what  wonderful airline!  The seats were comfy, and the food was recognizable!

Arriving at CGD (Charles DeGaulle Airport), I forgot what it feels like to not be able to communicate with anyone.  Every interaction is stressful and draining. We had a long list of things to do at the airport (bad idea!!!!): buy a miro SIM card for my phone, print our train tickets for our trip to Avignon in in days, but our museum passes, and find our bus.  Oh yeah, and we HAD TO BE at our rental apartment in 2.5 hours because the owner was meeting us there at that time and we had no way to communicate our lateness, should it occur.  Long story short, we  cut everything except finding our bus.  And after a 45 minute bus ride and a 40 minute walk, we arrived to our flat.  And it's AWESOME!  Check out pictures HERE. Considering two-star hotels cost around $150/night in this part of the city (We are in the Les Halles neighborhood, if you know anything about the geography of Paris)., we got this place for a screamin' deal at $80/night!  Suh-weet!

Eric and I have found that the best way to beat jet lag is to try (usually unsuccessfully) to sleep on the plane ride over, and then stay awake until a decent bed time in the city in which you arrive.  For uss, that meant that we were ready to go to bed t noon, when we arrived the the apartment, but that w had another 9 hous to kill before we could reasonably go to bed (dang!). The worst enemies of jet-lag are sunlight and activity, so, off we went!!

Our first adventure was to the Catacombs (for future reference, I don't speak a lick of French, so all spellings are my best guess, sorry!), a large set of limestone mines that were turned into mass graves when the french decided the cemeteries were too crowded.  They dug everyone up and stashed the bones in these "toumbs."  The bone piles were almost as tall as me and in some places as deep as 10-12 feet!  They used the femurs and skulls to fashion "attractive(??)" walls and dumped the rest of the bones behind them.  This sight is not covered by the museum pass (boo!), but we got in at the student price which extends to people ages 26 and under (just squeaked in!).  We waited in line for about 1.5 hours (museum passes allow you to skip lines, hurrah!), and the walk was about 2k. SO MANY BONES! 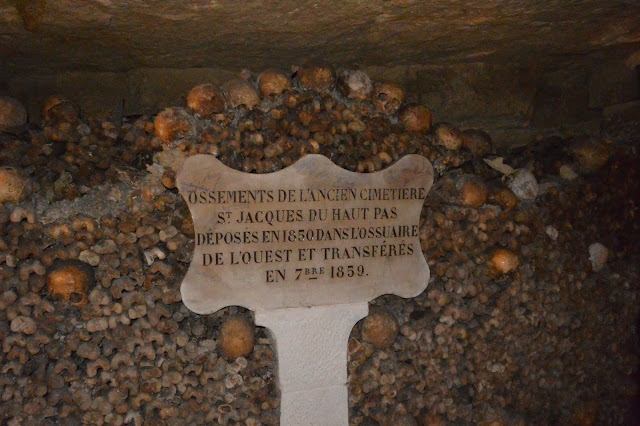 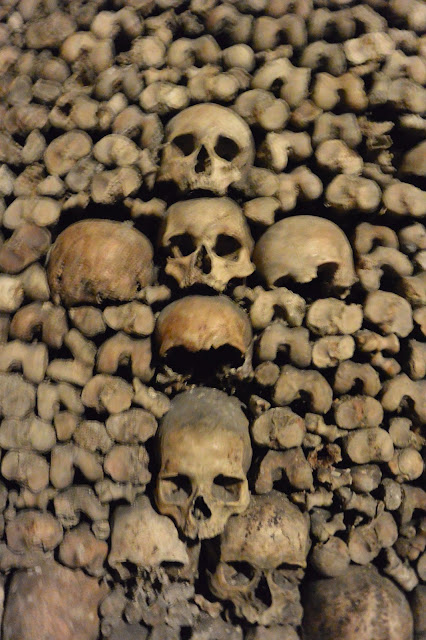 The tunnels were almost completely dark, and this is our camera's best attempt (pretty good for a pint and shoot, eh you photo buffs?), so sorry for the blur! 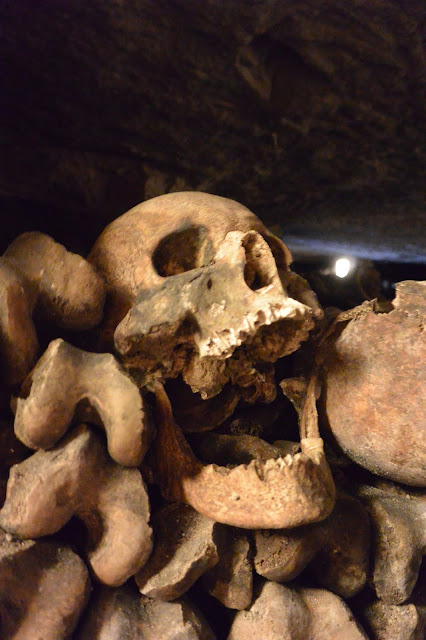 This dude was our favorite - he still had his jaw (mandibular?  It's been a while since I had anatomy...).

We also walked by the Notre Dame, and attempted our first of many "selfies."  Which leads me to a remark about unanticipated problems traveling as two... There's no one to take pictures of you together!  Most people you ask to take your picture don't even consider the Rule of Thirds, and they usually cut off your feet. :-/ I guess there are worse problems to have ;) 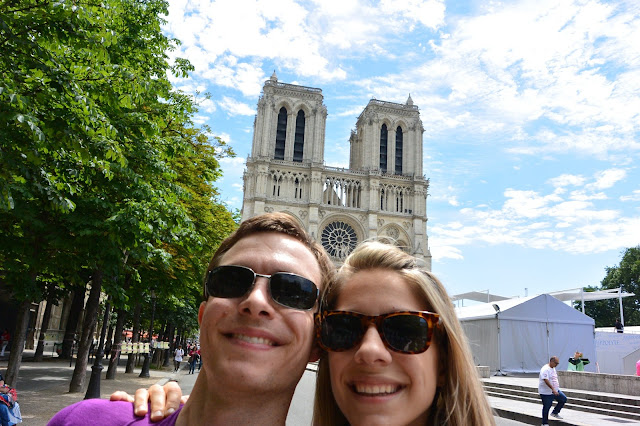 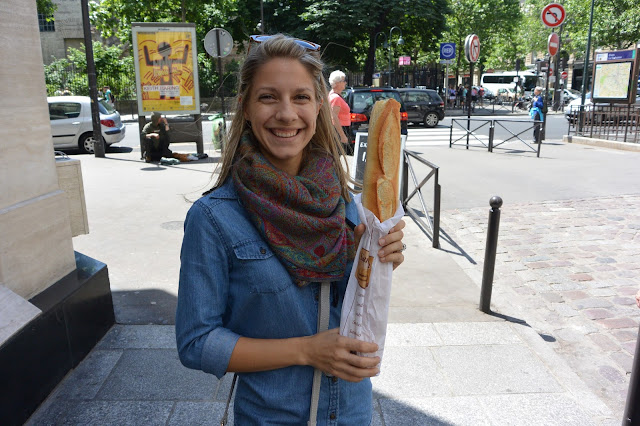 We got munchy and snagged our first (of many, I'm sure) baguette.  SO good!  We ate the whole thing.  As a small aside, I am going to need a personal trainer when we get home.  In a 32 hour day I managed to eat 6 meals - woah!

After the Catecombes, we were feeling a bit like death warmed over, so we decided to visist the Luxembourg Gardens. And do you know what?  Americans take parks for GRANTED.  I'm pretty sure everyone in Paris was in one park or another yesterday.  Any why not?  The weather was perfect, and the gardens are amazing as you can see... 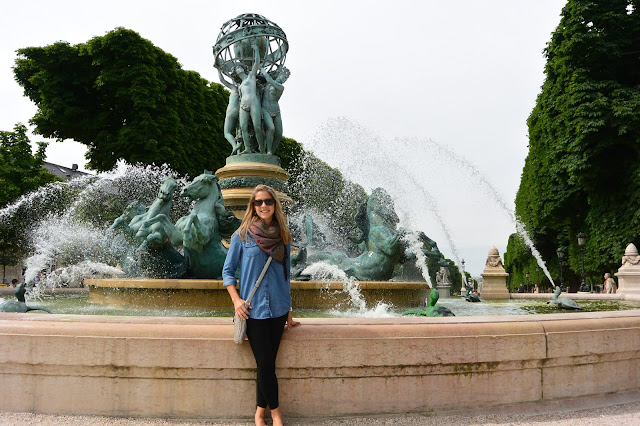 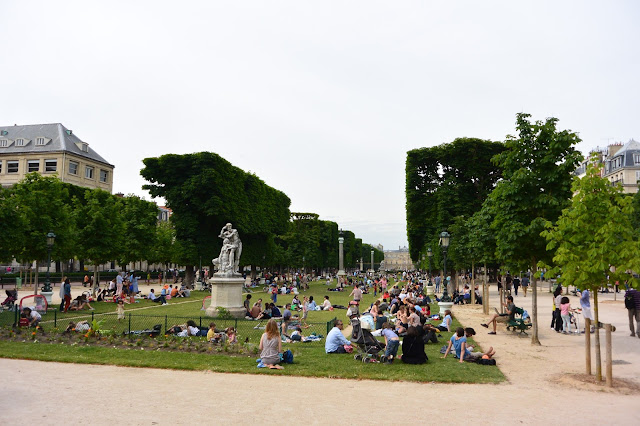 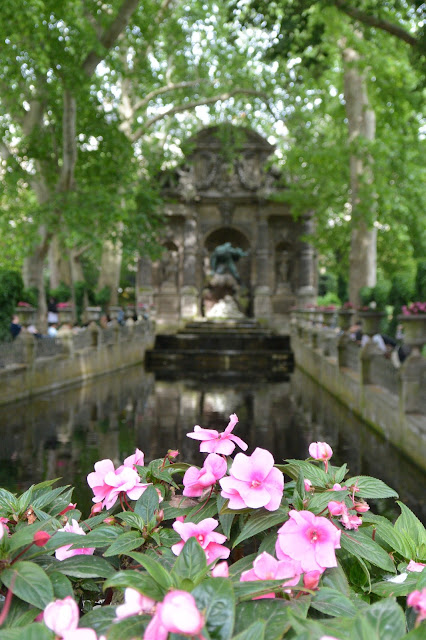 Wow.  Must remember to go to my local parks more often... When it's not 115 ;) We had about 2 hours left before we could collapse into bed, so we dined at a Parisian cafe, and happened to meet the sweetest Frenchman whose name I could barely pronounce, much less spell.  He told us all about where to go and what to see! 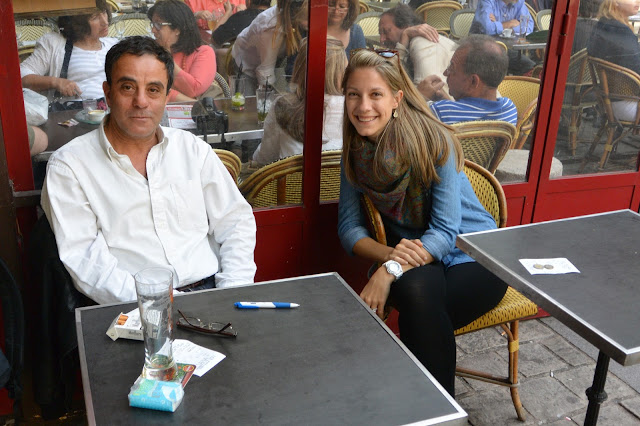 We both ordered things we could not understand and I ended up with a delicious cut of veal and Eric got a duck confit, or something similar, yum!  Hooray for trying new food! 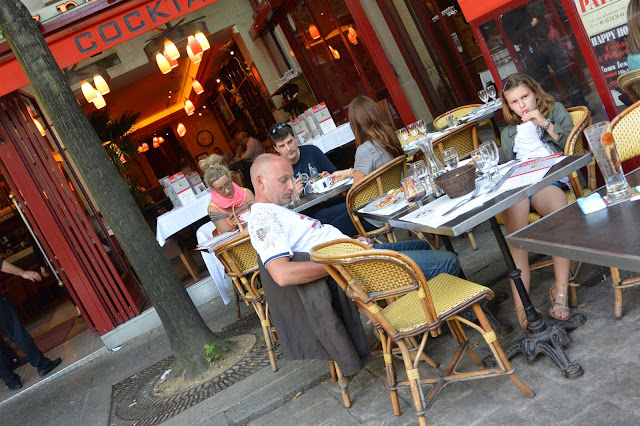 Our restaurant was right in front of the Sorbonne - so cool! 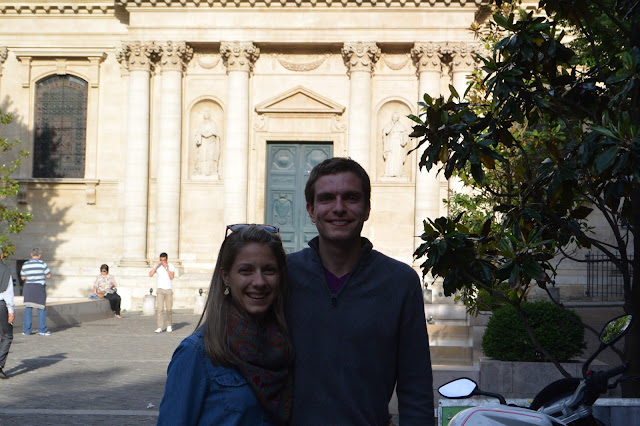 We then headed home after traveling for 15 hours, and walking 7.5 miles.  Yowza!  We ended up sleeping for 15 hours!!  Oops =) Day one in Paris was a total success. Every Parisian we met was lovely, and besides the airport stress, we had a delightful time.  Tomorrow you'll hear about our adventures in oversleeping (by 4 hours!), how we accidentally walked 11 miles (my feet HURT), our 3 hour tour of the Eiffel Tower, and another delicious dinner where we had no idea what we were ordering, but ended up pleasantly surprised.

Au revoir for now! (<- I hope I spelled that correctly!)