Paris day 4: not actually in Paris

We were in Versailles instead!  We learned our lesson from the day before, and we purchased tickets for the RER/metro to Versailles, which is ten miles from Paris and pretty isolated.  If you tried to go ten miles from the center of Phoenix you'd probably still have to pay a parking meter.  I love Europe.

As we were leaving the apartment this morning it began to sprinkle. No big deal.  We turned the corner on the main street. Hmmm, this is more like substantial rain - should I dig out my umbrella? Three seconds later, "I thought God promised never to flood the world again!!"  It was a wet morning.  I had a substantial fashion dilemma when packing (men, feel free to tune out here).  I knew the weather had been wet, and honestly, I had to ask our British roommates how to dress for the wet weather because beyond out and out rain boots, I really had no idea. In the end I rationalized bringing two sets of sandals and not "rain shoes." Reason number 1: rubberized rain shoes aren't my jam, fashion-wise. Reason 2: I packed for three weeks in a carry on and it was TIGHT. Seriously, the zipper was holding on by a prayer. I didn't have room for rain shoes and figured I'd trash a pair of sandals (the gladiator kind that have straps all over everywhere so they stay on), and that even if my feet were cold and dirty, they'd dry quickly. My theory got a serious test today.  And... SUCCESS!  I recommend this method for anyone packing light to someplace rainy in the summer.  While the leather on your sandals will be a strange ombre color, they dry SO quickly, and despite what Mother Goose may have told you, no one ever died from wet feet. Poor Eric's tennis shoes were soaking until 4PM, when it started raining again, womp womp.

Aaaaaand we're back to regularly scheduled non-footwear programming.  The rain abated (SAT word alert!) upon our arrival to Versailles and this was the view we were met with... 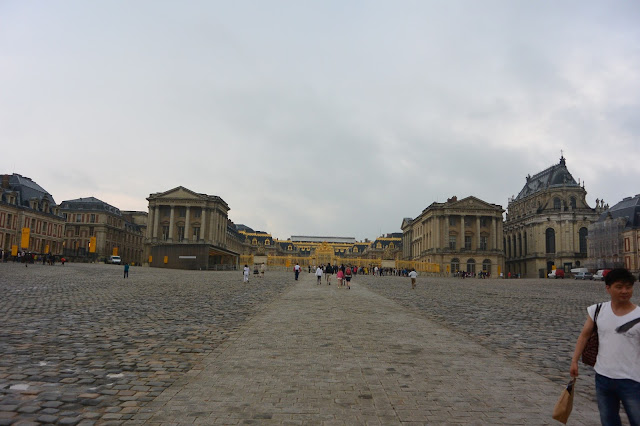 Wowzer! Look at all of that gold! This is only part of the chateau, I wasn't ever able to get the whole thing in one shot.  You know you're house is BIG when it can't fit in a camera angle. I'm resisting the urge to give you a history lesson on the chateau, mostly because that's a throw back to Mr. Bergez's 8th grade history class and I can't remember where my socks are, much less any interesting details.  however, I can tell you it was built by Louis XIV and expanded by the two Louis that followed. It cost roughly 50% of France's GDP that year to build the first phase (and they wondered why the peasants were mad???), and it was a pretty brilliant political move by the monarch to keep the aristocracy that was troubling so many other European kings under his thumb by forcing them to party constantly at his country house.  The property is 8 miles long and 3 miles wide, most f which are the gardens which are spectacular.  Versailles was home to thee three Louis, each successor less adept at controlling the country than the previous, until Louis XVI and his wife Marie Antoinette were finally captured by peasants and made a foot shorter at the top. Then Napoleon took over and lived here as emperor. Bad luck for peasants everywhere.  There's your mini-history lesson, even though I said I wouldn't.  Look what you made me do. 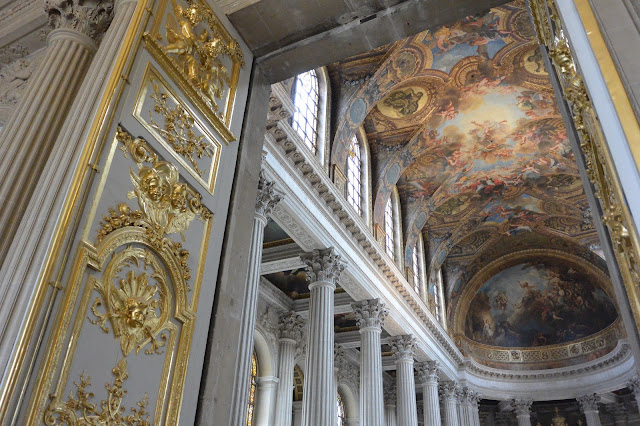 This is the ceiling in the chapel where Louis XIV would worship God and the aristocracy would worship Louis. No, really.  Louis was the only one facing the golden altar.  The nobles had their backs to the altar and were to worship Louis.  Weird that his empire went down in flames? Not so much. 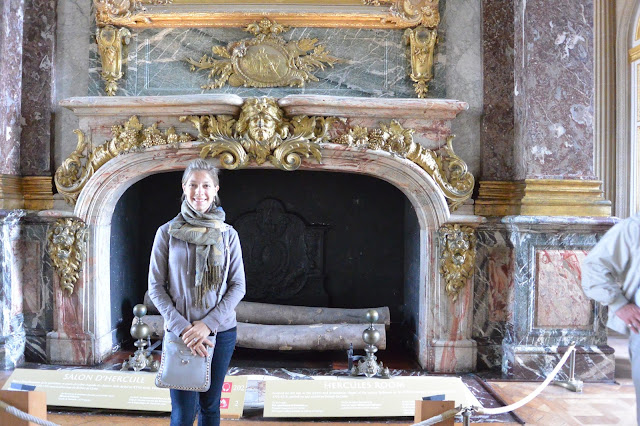 I think our queen size bed could fit comfortably in this fireplace. HUGE! 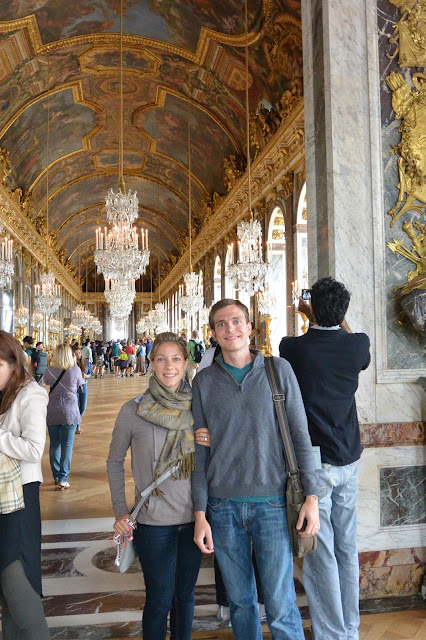 Hall of Mirrors!  Apparently, mirrors were a luxury of the time, and having a whole hall of them said to your guests, "I am King, hear me and my pocketbook roar. Now stare at yourself and don't get in the way of me running the country." But in all seriousness, it was sobering to be in a room where so much has happened. Wars were ended here, and depending on how you feel about The Treaty of Versailles, some would say that wars were begun here. 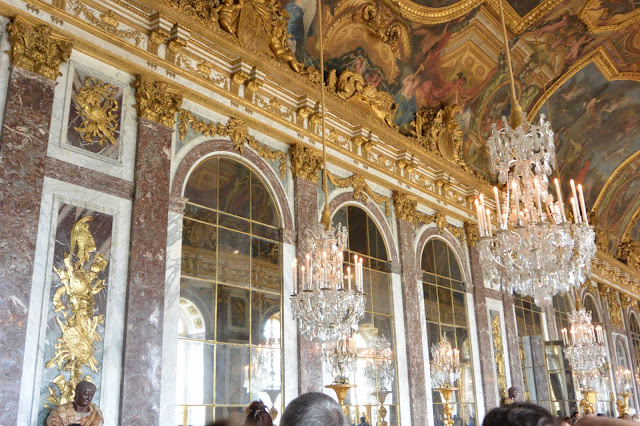 Each of the arched mirrors has a window opposite it to match.  They reflect the expansive grounds. 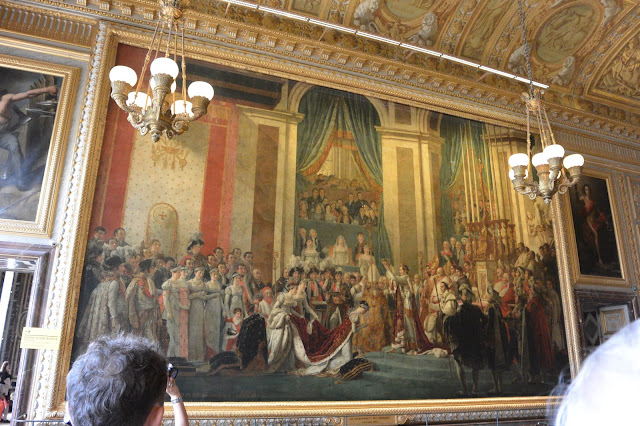 The coronation of Napoleon (original hangs in the Louvre).  And in typical Napoleon style, he doesn't need a pope to give him a crown, he does it himself, thankyouverymuch. 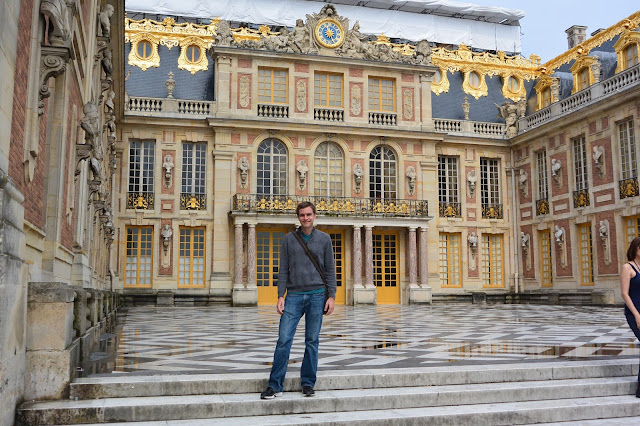 Some cute guy on the front porch of the chateau. ;) 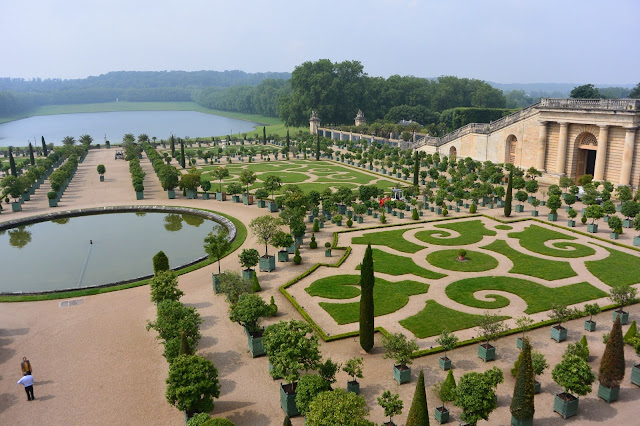 Just one eeenie-weenie section of the garden.  Louis was proud of his ability to grow oranges in a climate where no one else could.  Each of his 1000 orange trees was potted in a silver planter, and when the weather turned dicey, they were wheeled into a giant nursery. Then, they were wheeled out every afternoon for his enjoyment. Sheesh! 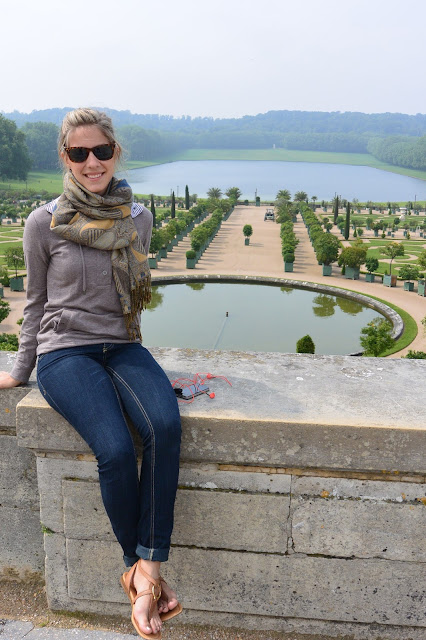 Me and my hero sandals! 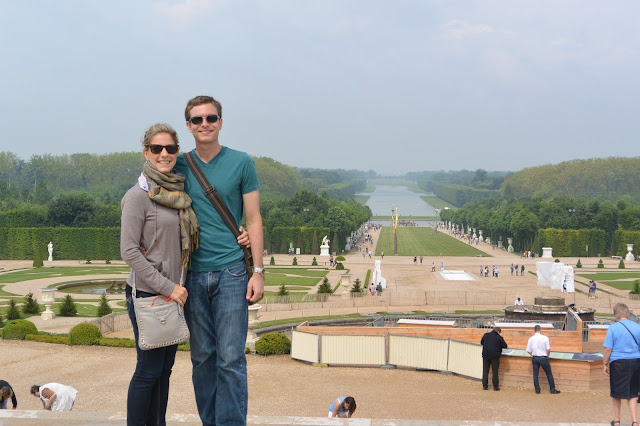 This looks straight out the eight miles of parks and lakes on the grounds.  The lake you see is one mile long in and of itself and you can rent little rowboats and paddle around.  I think a marathon should be run here. I'd sign up. Who wants to come cheer me on?? ;) Sadly, many of the fountains were under construction, but the rest of the grounds were so spectacular we didn't feel like we missed out. 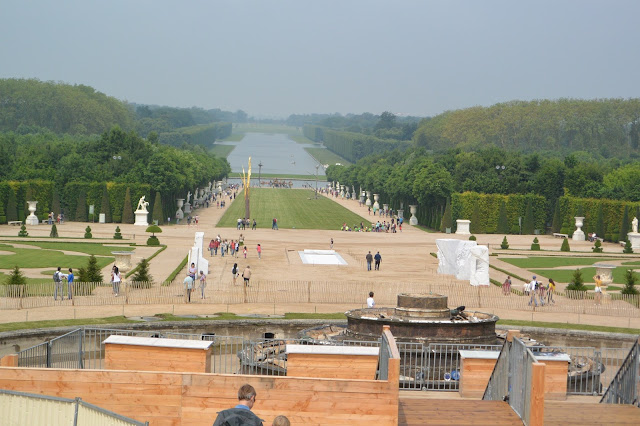 If you can see that gold spiky business on the left, you'll see that they have added modern art to the neo-classical statues already present. No bueno.  Given, modern art isn't my thing, but seriously, it obstructs the views and makes ZERO sense. *Steps down off soap box* 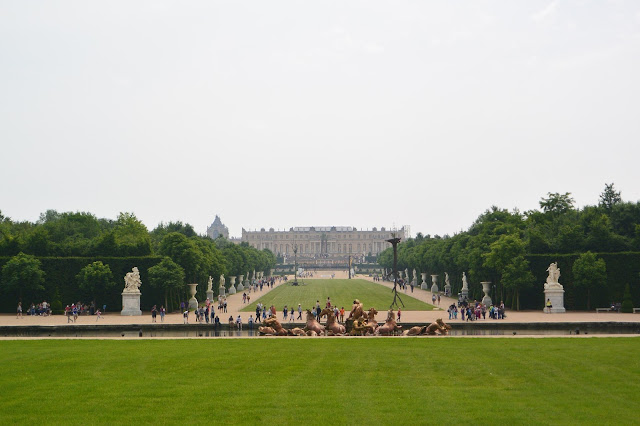 The main and smallest wing of the chateau from 3/4 mile away.  See? Huge. 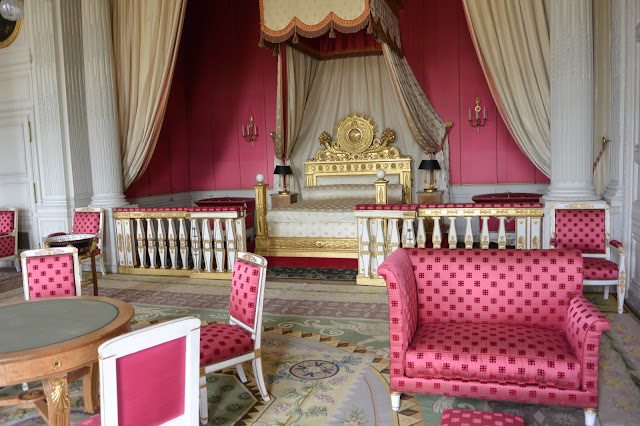 This is one of the less formal (yes, you read that right) bedrooms in one of the later additions to the chateau.  The railing is to keep the courtiers who are invited to watch you get up, dress, pray, eat, use the facilities (no lie!) and pretty much everything else, at a safe distance.  Um, no thanks. 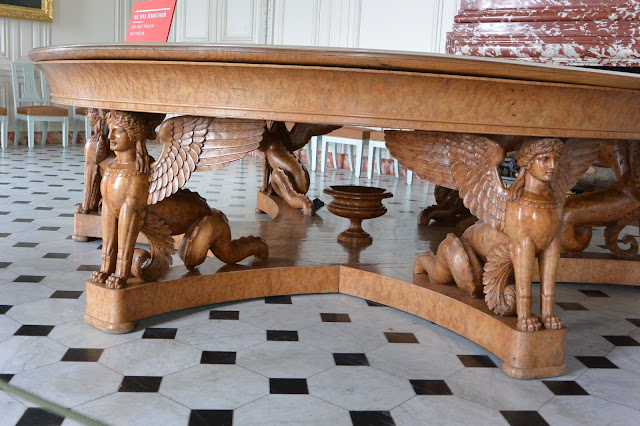 A table gifted to the royal family. It's carved from one solid hunk of wood ladies and gents. Wow. 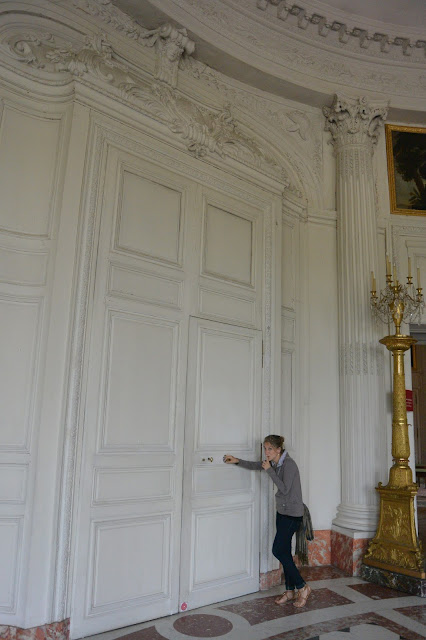 I tried to sneak into the unopened rooms and Eric caught me! Just kidding... maybe. 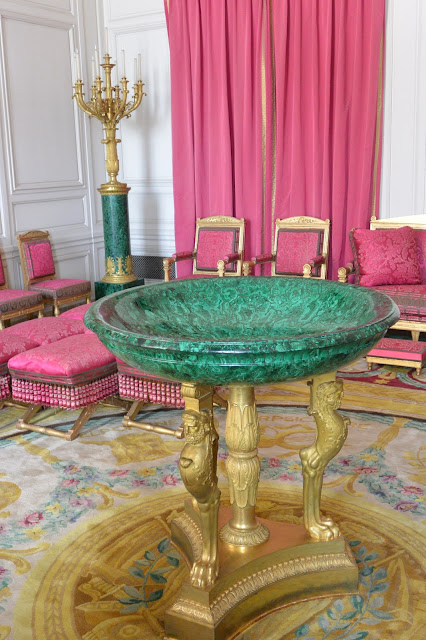 At the end of some war (it was a long day people, my details are fuzzy), the losing side gave France this present of a baptismal font carved from Serbian (? Maybe Slovokian? Started with an "S") malachite.  Isn't that crazy looking?  There were about 15 malachite pieces in the room, another of which you can see in the background. 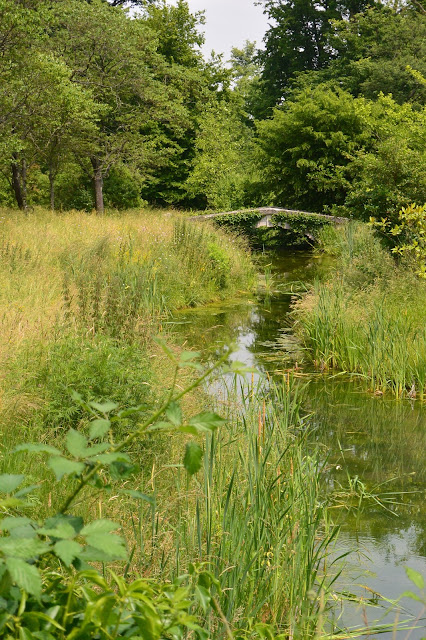 Most of the lawns are neatly manicured. We even saw someone trimming topiaries with a wooden guide, ah perfectionism. But the parts near Marie Antoinette's private farm were my favorite, I think.  They're more wild and mysterious. What can I say? I prefer meandering (English) gardens to manicured (French) ones. 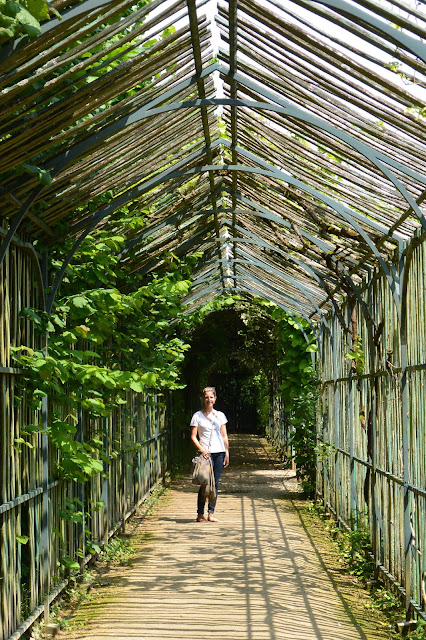 The farm still functions and local school children manage the plots.  They even grow grapes for pressing into wine as you can see above.  Well, actually there were no grapes, but the vines were there so you get the idea.
And about an hour after we took this photo we were back in Paris. Just as we were arriving home, we got caught in another downpour and dodged into a café for dinner to avoid the torrential rain.  One bely full of Risotto, and another full of Cote de Boeuf later we headed home and collapsed. Again.  This seems to be a theme!
Tomorrow you'll hear about how I'll never drink another cup of coffee again (maybe), how we almost got booted from a major museum (not really, but my guilty conscience was working overtime!). But, au revoir for now!
Posted by April @ An Urban Acre at 2:35 PM