Bonjour from Paris day five! Seriously, how has it been 5 days already? We are more than halfway done with our first Paris stay and I still feel like we just got here!  It was a bit hard to sleep last night owing to the fact that it was trash pick up day and apparently in Paris it's mandatory to take the trash to the bin in the shared courtyard between midnight and 2AM and then you MUST slam the lid. No exceptions. We needed a pick me up so we stopped on our way to the Orsay to grab some coffee.

You can't really get a cup of brewed "coffee" here.  It's all espresso, but I'm not complaining.  I don't think I'm even going to drink another cup of coffee ever again - I'm so enjoying sipping my solo from my demitasse cup and saucer. C'est magnifique! And, in another edition of "News That Shocks No One," I ordered a goat cheese crepe and it was fab.  This country is seriously feeding my cheese addiction.  Afterward, we headed out to the Orsay, which for those of you who don't know (this group included me until the start of our audio guide), it picks up where the Louvre leaves off in terms of the historical timeline. It shows art only from the 18th and 19th centuries and it's almost entirely French art, but hey, it's their country.
The building used to be a train station, and was slated for demolition until the public demanded it be used as a gallery (presumably by setting up a strike - a little poking fun at the French here). You can still see the vestiges of the station in the photo below.  The long gallery used to be filled with platforms and commuters, now it's filled with statues and oil paintings.  Good trade off. Check out the original station clock in the main gallery... 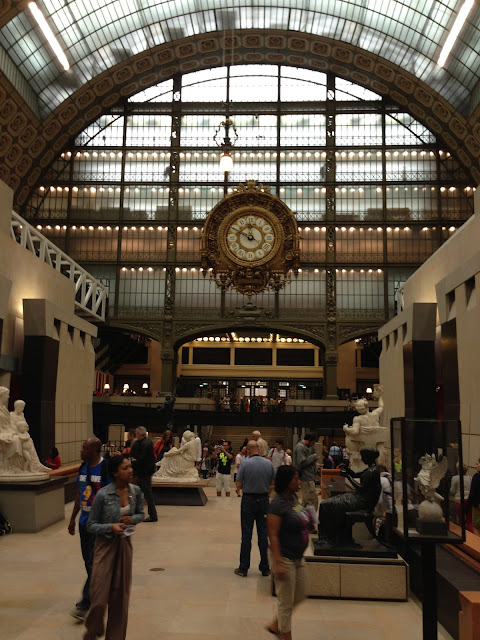 The views from the top floors are incredible. This is really the geographic center of Paris, and you can see everything.  Below is the hill on which the Montmarte neighborhood is situated. The white-domed church you see in the distance is called Sacre Coeur. The blog will take you there on Sunday. =) 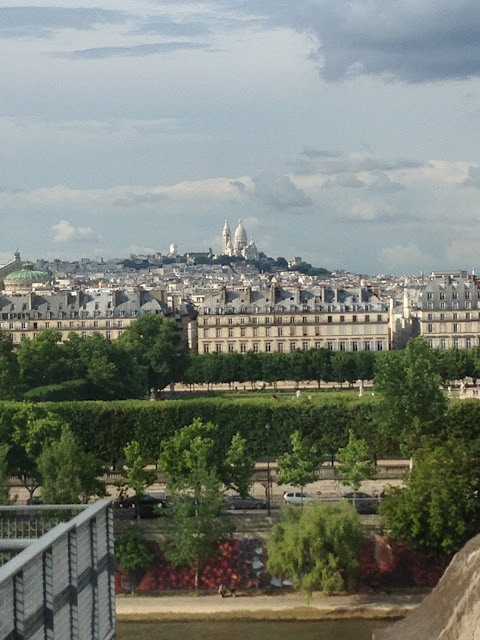 And out the windows on the other side you have a fantastic view of the Eiffel.  If only they served dinners under 35 euro in their restaurant - alas, they don't. 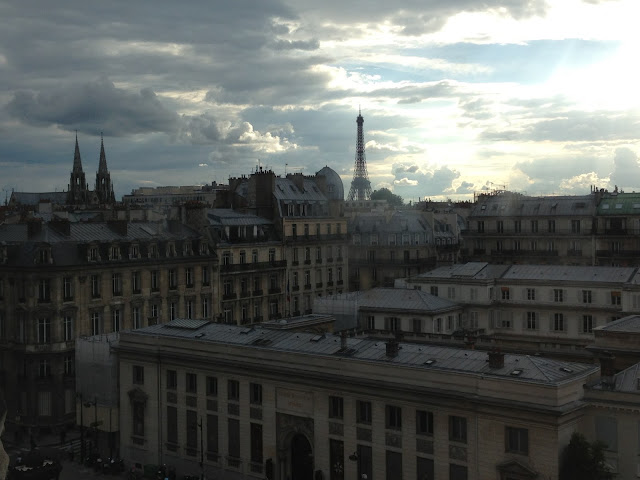 And while I have a moment, let me again sing the praises of the Museum Pass.  See the line below?  Yeah, that snakes into the street, and down the block.  And you can't see that they have a Disneyland-style (though not nearly as efficiently run) rope line to wind through before they get to ANOTHER line for tickets.  All in all, the wait was into the 3 hour window.  Guess how long we waited? Four minutes - I timed it (the things I do for you blog readers ;)). Yeah! Museum Pass for the win! 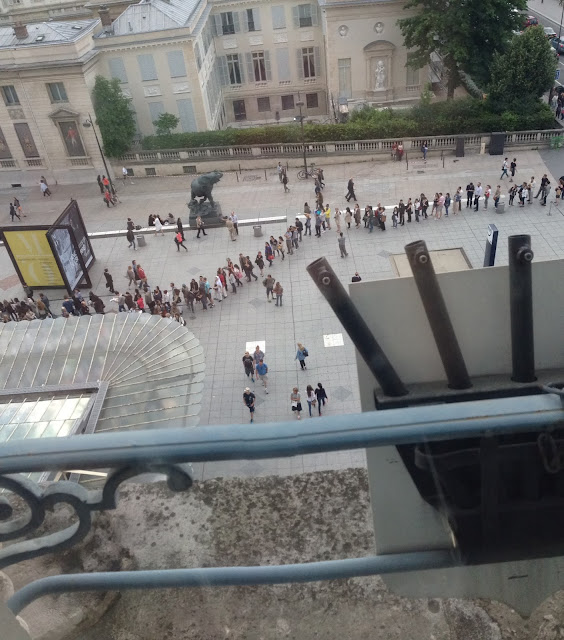 The clocks on the exterior of the building are see-through and make a superb silhouette. 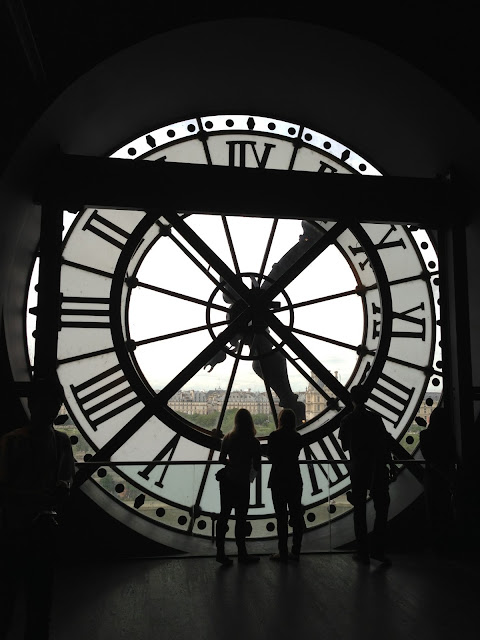 So... Some of these photos are less than great, owing to the fact that photo-taking wasn't allowed and every attempt made me feel like I was Jason Bourne (not really, but I can dream). I  absolutely promise you that I do not remember any titles of the art or their associated artists, so let's just get that out of the way, ok? Ok. Eric and I both loved this painting of a famous Chemist whose name escapes me.  check out the detail in all his little beakers and pipettes! (<- That is a seriously fun word to say. I highly recommend you saying it 5 times fast when you're having a bad day.  It promises to induce giggling.) 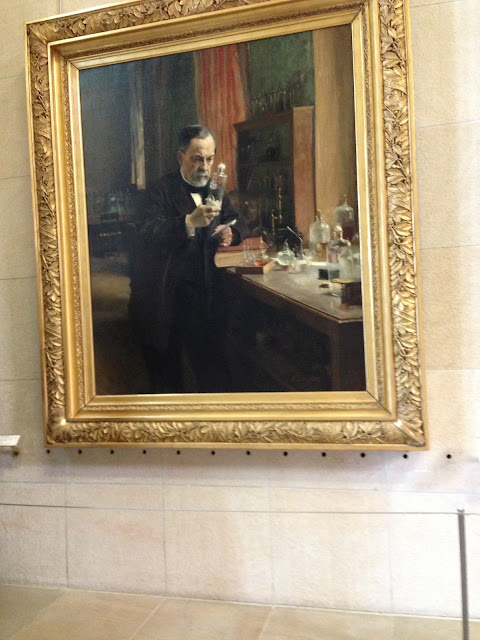 So, I have sad news for you. Despite the fact that The Orsay holds the largest impressionist collection in the world, you're not going to see any. *cue sad music* The photo-police to museum attendee ratio was basically 137 to one in those rooms, so no-can-do with the Monets and Manets.  But it's ok because I took this picture of a Lobster for you instead. 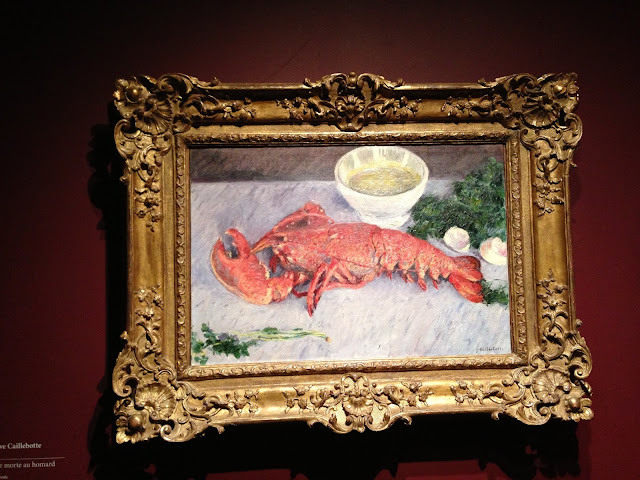 You're welcome. I did manage to slyly grab a shot of a Cezanne (I think?) who was of the Pointilist School (think bajillions of tiny dots), so there's that... 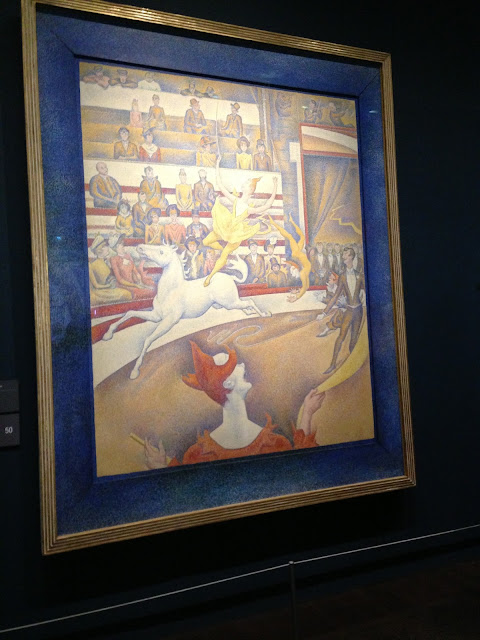 In all seriousness, he only used four colors to make "The Circus," and it looks incredible.  Color me impressed.

The "Far East" room was the shocker for the day. We expected to be wowed by the impressionists, but we didn't see these guys coming.  We both fell in love with the North African scene of camels crossing Algeria (don't ask how Algeria counts as Far East because I don't have an answer). 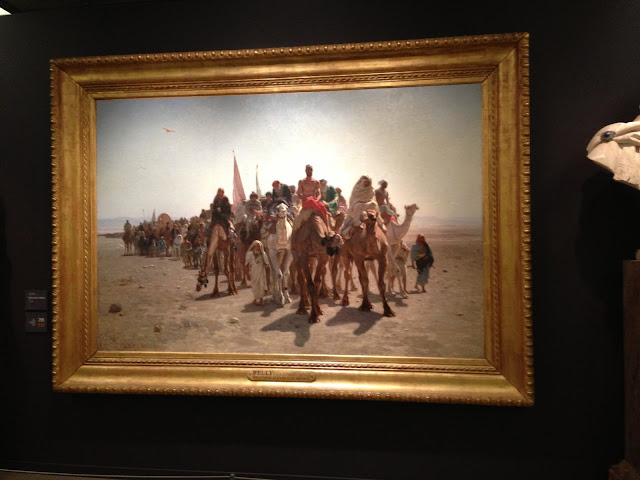 And this elephant bathing scene totally captured us.  I think these were so unexpected and refreshing amidst all the sun-dappled Parisian parks and seascapes of the impressionists that they really spoke to us. 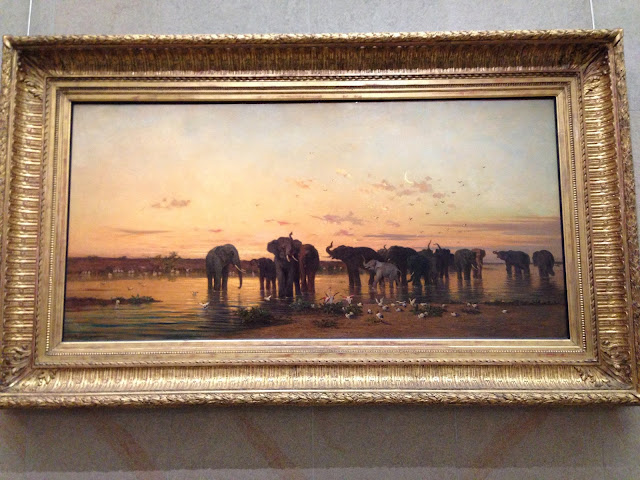 There was also a whole room of vases that were REDICULOUS. Seriously they were basically 12 feet tall and had gold sculptures coming out of the top.  This is not a fantastic picture (picture me, dodging museum workers like Jason Bourne), but it really looked like Wedgewood china.  It wasn't, but it looked amazingly similar. 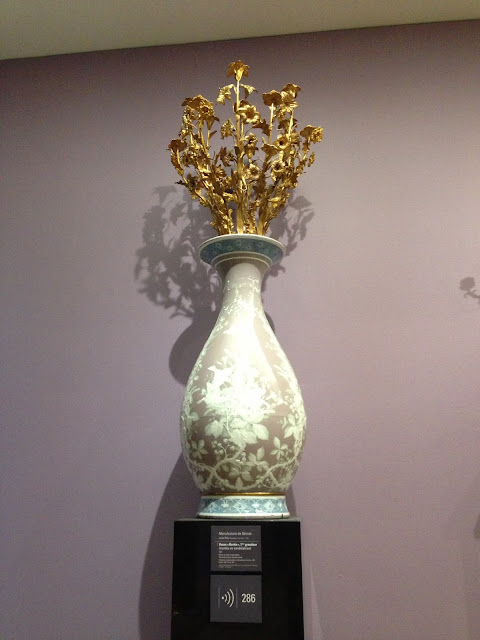 I was probably unreasonably giddy to see the painting below of Don Quixote.  I stared at this painting on the cover of my book while I read it in high school.  And if you've ever read that thing from cover to cover, you know it look me a LONG time. It's bigger than the bible. Anybody else recognize this one from the cover?? 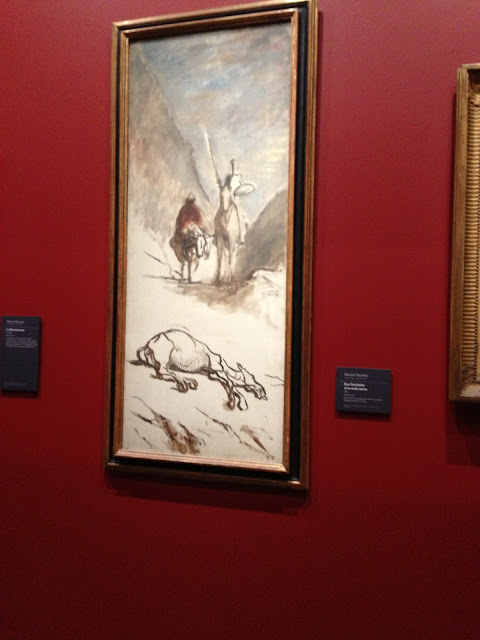 Ok, so this one is waaaaaaaay far from the painting, but I LOVE this piece that shows the ballerina dancing (I think it's by Degas?).  There was a museum worker right there, so it was an extra special super-covert op situation.  Mission: successful. 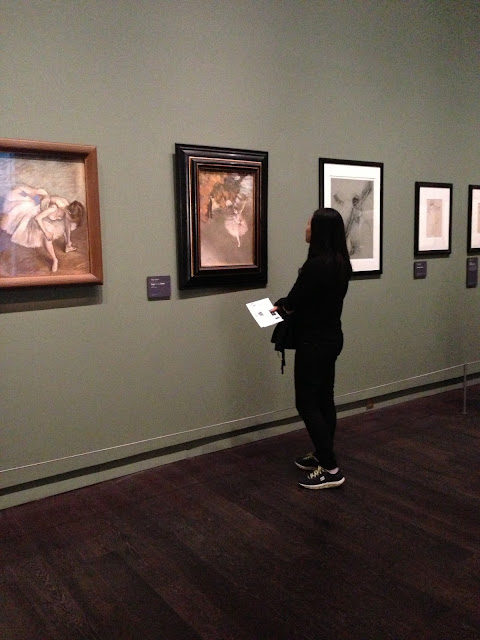 Even the Coke-a-Cola polar bear made an appearance... 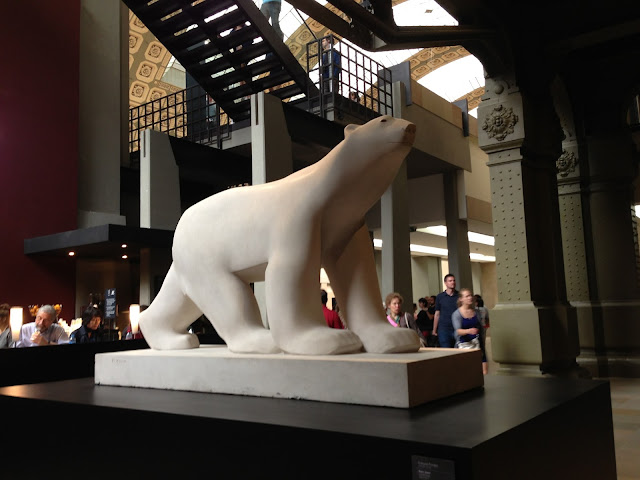 We even got a little slice of home in the furniture gallery (where I seriously could have spent DAYS, I tell you!) where we saw this chair by Frank Lloyd Wright.  Ugly chair, but nice to see the word "Phoenix" in print. 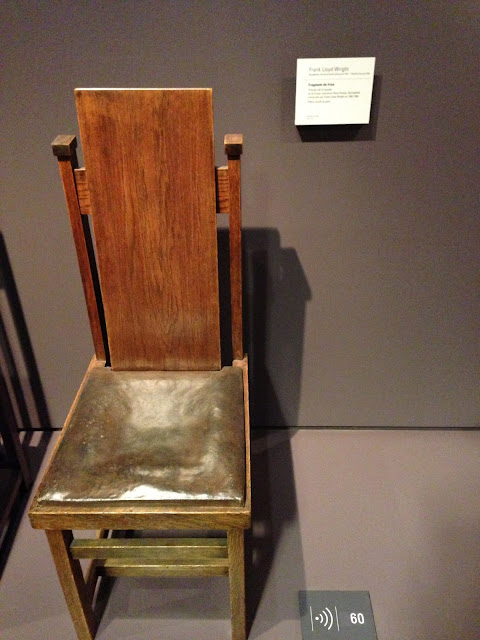 So, sorry again about the lack of photos of the good stuff, but after I look the photo of the chemist, I'm fairly certain the museum put a tail on us - no, really.  For the last 3 hours of the day, every time I turned around the same lady was right there.  Sneaky? Not so much. Effective? Definitely.

Afterwards we headed home for dinner.  We stayed at the museum for 6 hours!!  We took a two hour lunch break (look how French we are!), but our combined time at the museum was 6:30.  Woah! We have discovered that we providentially chose the best cheap apartment in Paris.  We have eaten out for every meal with the exception of our picnic, and we've eaten all over the city.  And our three best meals have been less than a 2 minute walk from our flat which is quite literally surrounded by amazing restaurants. Tonight was no exception because I could see our door from our table at the restaurant. I have been really trying to expand my palette (I tried eggs three times, mom! Still hate 'em, but I tried!), so tonight I ordered lamb (yuck), with scalloped potatoes (double yuck). Yes, I know.  Judge me, judge away. 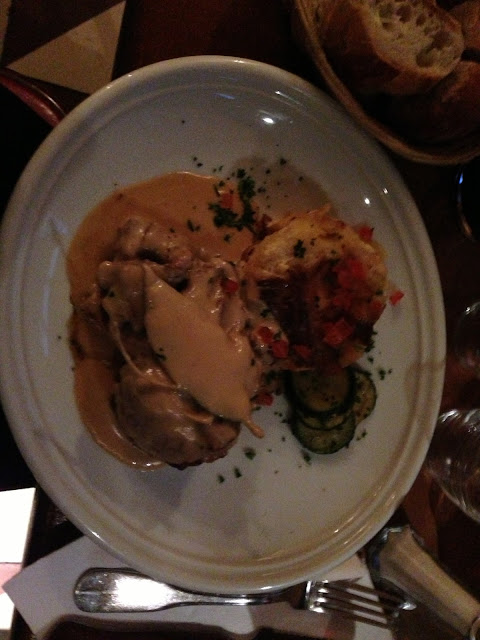 This gorgeousness is what arrived at my table (sorry it's sideways, I'm tired so just tilt your head). Every single bite was PHENOMENAL. Seriously! The lamb was falling off the bone - it was fork tender and sooooo flavorful! The scalloped potatoes were done to perfection and you could tell they had used really good cheese (always a god place to start).  All of this plus bread and wine for (drum roll) 16 euro.  In dollars that's about $20.  Best lamb of my life, amazing potatoes, wine, and all for $20, tip included.  What are we doing WRONG in America?! Seriously, someone work on that while I'm gone. Your mission is incredible lamb and an equally amazing side dish for under $20. Go.  Seriously though, this was just your ordinary, run-of-the-mill street café.  Wowzers. Love me some French food.  That's all I have for today, sorry there aren't any pics of us, but picture black ops had so sacrifice something and it was our faces. Which is a little sad because we both looked very Parisian today and I was proud of us.  No worries though, we packed in a carry on so we'll repeat those outfits...  many, many many times.

Check back here tomorrow (Hopefully! Blogging ops are getting less frequent.) to hear about meeting Mona and Venus, and  how we got in touch with Eric's Polish roots.  Au revoir for now!
Posted by April @ An Urban Acre at 12:16 PM