Big Bear Lake (and how we were almost murdered)

We're back!  We had an absolutely lovely time, and we are the happy kind of exhausted being as we arrived home at 2:30AM yesterday.  WARNING: this post contains pictures of a family vacation and if you are not interested in such things, turn back now (however I do promise several amazing pictures of houses!).  Now we've got that out of the way...

Let me first say that we did not mean to arrive home so late.  We were headed back at a completely decent hour and should have been home by 11:30.  However, if you've ever driven to Phoenix from LA, you will understand the following story a bit better than others.  You drive almost the entire way on the I-10, and past Indio, there's really nothing until almost the border of AZ.  We were plugging along here (Eric was driving) going about 75 when we came upon a red suburban in front of us who was going about 55.  Naturally, we got over to the left to pass and gave him plenty of space (Eric is an AMAZING driver - SO careful).  This punk speeds up so that we cannot pass.  So, we get behind him again, and he purposely slows down.  I'm annoyed, Eric doesn't really care (another example of why he's an amazing driver - he's impervious to other people's stupidity on the road.  I am not so kind...).  Mr. Red Suburban Punk now gets into the left lane and boxes us in while making rude hand gestures.  If we speed up, he speeds up, we slow down, he slows down, etc.  Ummm, wtf?!  Eric calmy decides to get off the road at the next exit, as it's NEVER good to drive boxed-in on an interstate (there are only two lanes in each direction at this spot).  As we are bout to make good on this plan... BAM! I slam back in my seat, black out a bit, and Eric swears.  CRAP.  Turns out, because we were boxed in, we hit a TIRE, a whole effing TIRE and we couldn't swerve because Mr. Red Suburban Punk (this is FAR too nice a name for him, but I like to keep it family appropriate around here) was right next to us.  We had to pull over immediately in the dark to see if any damage had been done.  We could see several things hanging down from the underside of the car, but I urged Eric to keep driving (albeit slowly) until we could get to a real exit.  We were about 25 miles from Blythe at this point.  He obliged and told me later that he hurried me into the car because he had seen someone walking down the highway about a mile back and wasn't anxious to meet that person (this is where the story stops being so much about a tire and our car and more about how we were almost murdered...).  We drove about 40mph to the next real exit, which had NOTHING after it, but a dirt road and some very bright distant lights. I was HORRIBLY uncomfortable with the situation.  Something wasn't right about the whole place.  Eric took a look and discerned that the belly pan on our car (the bit that shields the engine from the road) had been cracked and needed to be secured.  Duct tape was his thought and he started searching the car for some.  At this point, by GOD's grace... I remember where we are exactly and I ORDER him back into the car because I see a few people running down the dirt road at us, carrying backpacks.  We quickly re-enter the interstate and about 30 yards down the road we see this sign 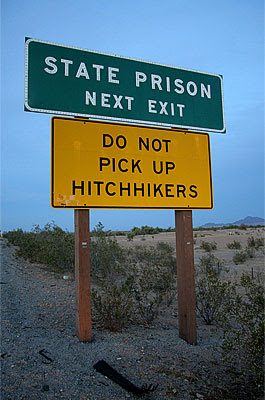 Only it was COMPLETELY dark outside.  THAT'S what those bright lights in the distance were.  I don't even want to think about who was running towards us with backpacks...  We were almost MURDERED!  Probably not, but it felt that way, for sure.  At this point I'm starting to feel very sore and feverish and swollen.  It's a big impact to hit a tire going around 60mph, and it mostly hit my side of the car.  In the end, we duct taped it back together in Blythe and drove safely home albeit two hours later than we'd planned.  Yesterday, I was so sore I could barely move, and so swollen I couldn't fit into my clothing.  UGH.  I'm recovering more today, but that's largely why there was no blog entry yesterday.  And in my usual stubbornness, I'm  refusing to go to the doctor,  Nothing they can give me is any better than Tylenol, right? ;)  Also, the damage will cost right around $400 - look our for karma, Mr. Red suburban Punk, I hear she can be quite the bitch not-so-nice-lady (sorry, trying to keep with the family-friendly vibe). That is my CRAZY story from our trip.  Now, onto the good stuff...

Big Bear Lake is gorgeous.  It's park ski town, part resort town, part hick town, part celebrity hang out.  Best of all worlds, if you ask me...  We took a tour around the 7 mile long, one mile wide lake from this marina: 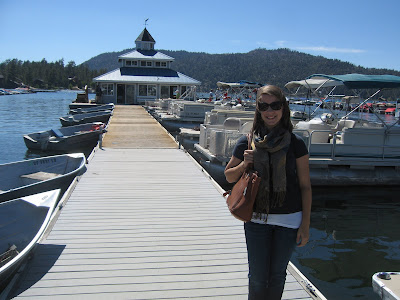 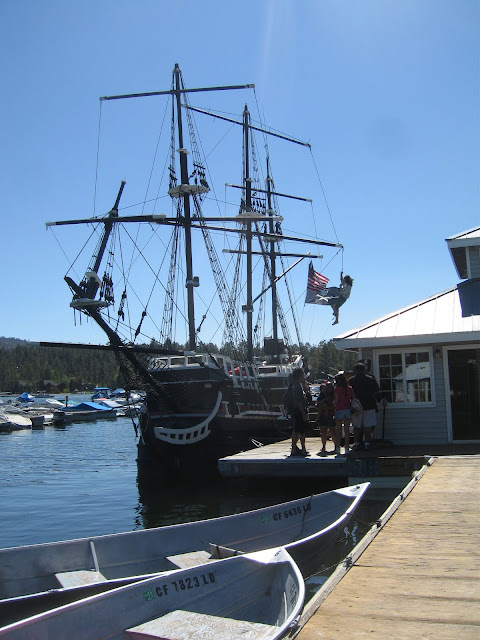 This is "The Time Bandit" a 1/3 scale pirate ship used in the filming of the 1981 movie by the same name. It's about a boy who joins a group of time traveling dwarfs aboard their pirate ship.  Sounds like a winner...  But hey, it was produced by George Harrison, so it must be good, right?

On our tour, we were told about the history of Big Bear Lake and some of the famous people who live there part of the year.  It was really interesting, and some of the houses we saw were OUT OF THIS WORLD.  Here's a little taste... 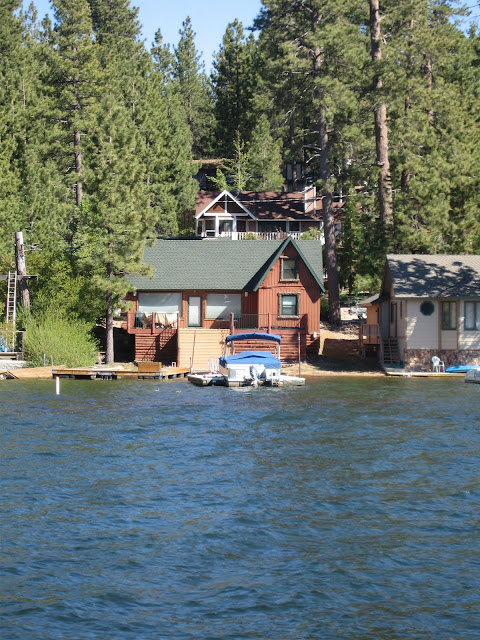 This residence belongs to Olivia Newton John.  I expected more than a pontoon boat from her, I'm just saying... 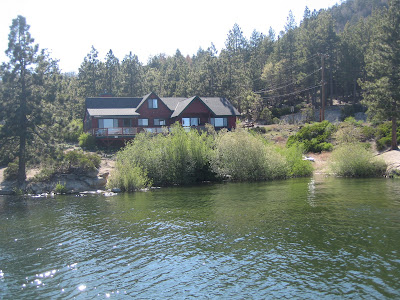 This one belonged to Andy Griffith for YEARS until my aunt and uncle nearly purchased it, then decided they didn't want it (no sewer, only septic - yuck!), then someone else bought it.  And now I'm whistling that Andy Griffith song in my head... 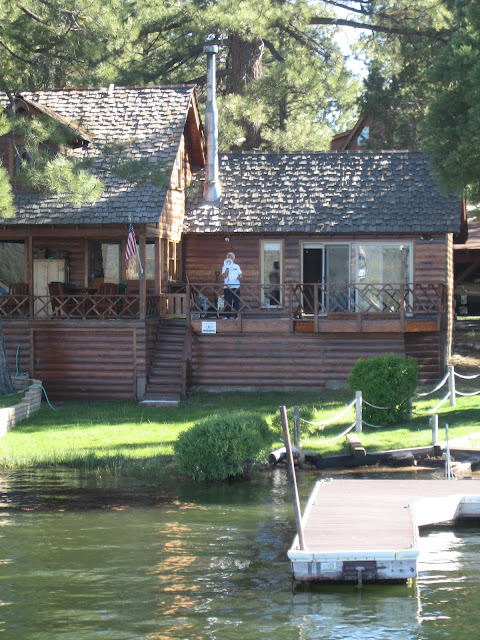 Homeboy on the porch with a megaphone is Noel Blanc, son of Mel Blanc, voice of Bugs Bunny, Daffy Duck, Porky Pig, and almost every Looney Tune there is.  He comes out to give the tour boats a sample of his voices that he learned from his dad.  Cute =) 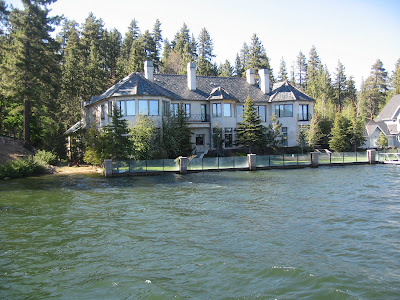 Gorgeous mansion.  You can see how high the lake is; people who didn't have retaining walls had parts of their yards flooded. 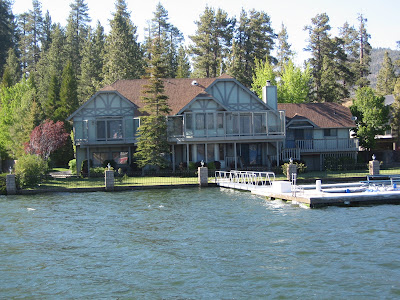 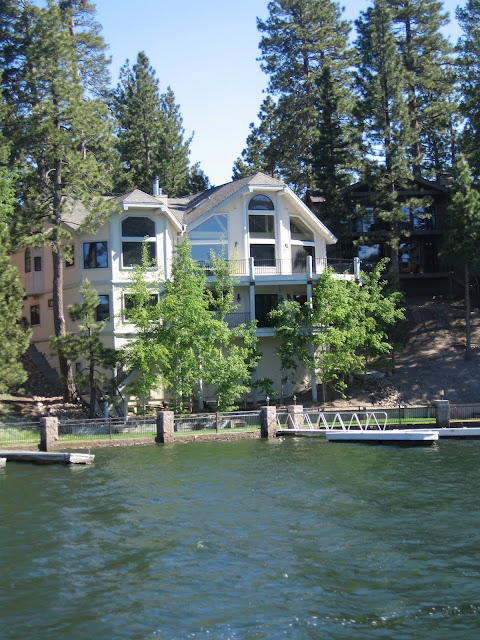 The homes were absolutely breath taking, and I couldn't believe the lake wasn't more crowded!  It's a 90 minute drive from L.A. to a sunny lake with cool weather and NO SMOG.  No wonder my aunt and uncle moved up there permanently from Orange County.

We also got a little time to go thrifting/antiquing.  We found a lot of adorable thins, but the prices were really inflated, so we didn't come home with anything.  However, we did see this gem and had to take a picture: 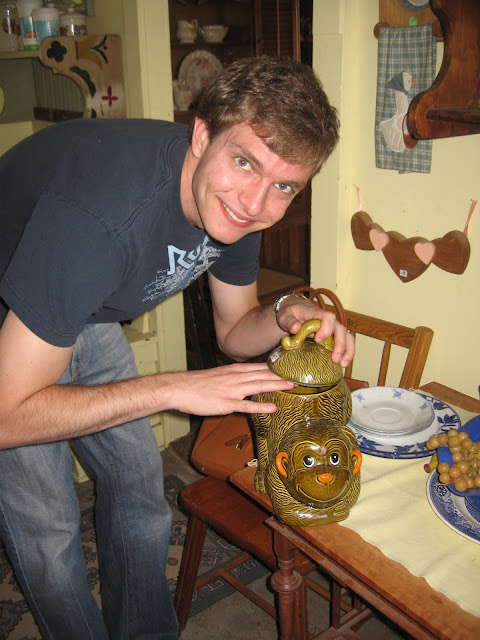 Yes, that IS a monkey cookie jar where you must remove the monkey's butt to retrieve your snack.  Awesome.  But sadly, we left it there for the next monkey-butt enthusiast.

We had such an amazing time celebrating our anniversary.  We even got to spend most of Sunday with my aunt and uncle seeing the sights of Big Bear by land and sea.  I highly recommend a visit, especially by those of you who already live in Southern California.  It's close, convenient, and a great getaway.  Our actual anniversary was yesterday, and we celebrated by stuffing our faces with Mexican food and taking our dog to PetSmart to spend his gift card he won over at Decor and the Dog (Even more confirmation I married the right man: Anniversary = copious amounts of Mexican food + time with the animal).  I'll show you tomorrow what Ted came home with (he's so excited!).  I hope you're having a wonderful day, and happy Tuesday, friends!!
Posted by April @ An Urban Acre at 11:31 AM